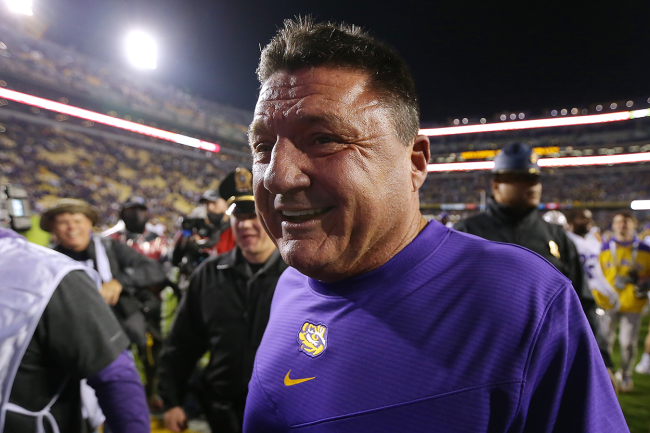 Ed Orgeron and LSU parted ways in October, but the national championship-winning coach was allowed to finish out the season. Not long after the year came to a close, the Tigers announced that they were hiring Brian Kelly to replace him.

Kelly came down to Louisiana from Notre Dame and proceeded to break out a bizarre, fake southern accent. He has since made headlines a few times for all of the wrong reasons, but is also taking steps forward to bring LSU back to the top.

Meanwhile, the Fighting Irish have moved on to Marcus Freeman. By all accounts, the players and coaches could not be more thrilled with the hire.

One recent story about Freeman illuminates the glaring differences between him and Kelly. Notre Dame is in good hands.

To bring things full circle in a not-so-subtle act of pettiness, Orgeron swung by South Bend this week.

Although Coach O made it very clear that he is not in any rush to get back to coaching, he left the door wide open.

Kelly, of course, replaced Orgeron at LSU. Orgeron was then speaking to the team which Kelly left.

During his speech, Coach O said that Notre Dame will “win it all” under Freeman. He had nothing but praise for the first-year head coach and his staff, which replaced his replacement in Baton Rouge.

“What a tremendous, tremendous university you have here,” he said. “What a great coach and coaching staff you have. Some of the best players in the country are right here in this room. I don’t know when it’s going to happen, but with this staff and this team, you’re gonna win it all. When it’s gonna happen? I don’t know. I can’t tell you that. How bad do you want it? You don’t have to wait for it. Why does somebody need to be better than y’all? I’ll tell you what, physicality, use it. Other teams fear it. Use it. Good luck to you guys. I know you got a lot of things to do. Coach, thanks for letting me talk to this team. I am fired up. I can’t wait to see you guys play. I’m gonna be pulling for you guys. Remember this. It’s your team. It’s your brother. You fight for him.”

Here he is praising his replacement’s former program:

"I don't know when it's going to happen, but with this staff and this team, you're gonna 𝐰𝐢𝐧 𝐢𝐭 𝐚𝐥𝐥."@Coach_EdOrgeron | #GoIrish pic.twitter.com/0R80IVxEpz

The LSU/Notre Dame/Orgeron/Kelly/Freeman connection that was recently established during the offseason really came full circle and it couldn’t have been better.