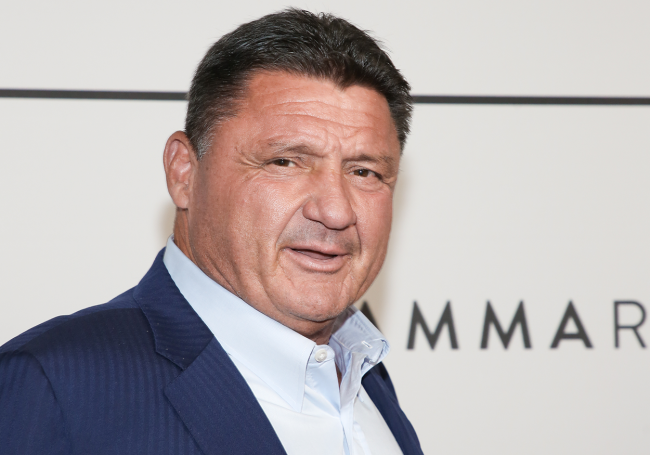 It has been 136 days since Ed Orgeron was last on the sideline of a college football game as a head coach. The 60-year-old coached his final game with LSU last season but that has not stopped him from hanging out around the game.

Since being let go by the Tigers, Coach O has been spotted all across the country at various high school and college games and practices. Most recently, he was at Notre Dame with his sons, who are also in the coaching field.

Orgeron wanted to show his sons what the culture looks like in South Bend under first-year head coach Marcus Freeman and had nothing but high praise for the coach and the program.

Former college head coach Ed Orgeron is at Notre Dame watching practice. He has three sons coaching, so he wanted to show them about Notre Dame football, “I have a lot of respect for Marcus (Freeman).” pic.twitter.com/oJ0j0TzukD

While in town, Orgeron had the chance to be on the sideline as the Fighting Irish ran through a spring practice. Although the national championship coach was close to the action and admittedly got the itch to get back into coaching, he is not ready to commit to football again at this point.

Orgeron got paid a lot of money not to coach at LSU and has been enjoying his time off. He made reference to his unemployment plans after being fired in Baton Rouge and was recently tearing it up at spring break in Cabo San Lucas. Needless to say, he is having fun living life without coaching.

Ed Orgeron was very clear that his options are open for a future in college football.

Based on Coach O’s comments, it does not sound like he is going to jump back into coaching. He is waiting for the right opportunity and it doesn’t seem like that will come this year.

Former college coach Ed Orgeron on if he got the itch to want to comeback during practice. He was also asked how long this break from coaching may take, “I am enjoying the year off.” pic.twitter.com/YVHTJcxKGb

Note how Orgeron said “year” off. That would mean a full year, which would indicate that he will not be on the sidelines this fall.

Obviously, that is subject to change. And he seems eager to get back eventually, especially after being at Notre Dame’s practice.

Just not right now. There is no rush for Oregeron. He is making millions of dollars to do nothing. Can you blame him?