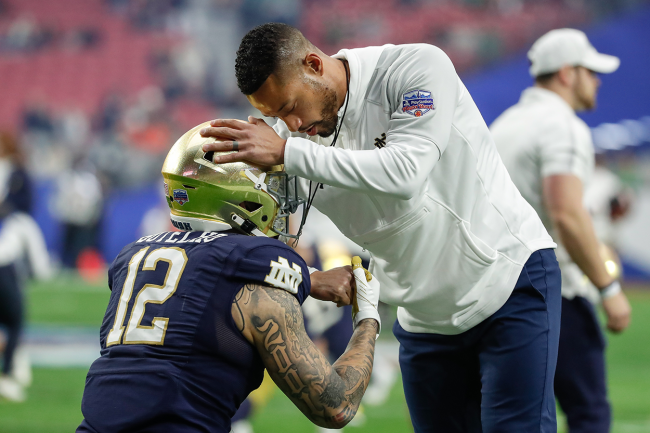 When Notre Dame announced that Marcus Freeman would be the school’s next head football coach on January 8, 2022, it came under unexpected circumstances. Brian Kelly left for LSU prior to the Fighting Irish playing in a New Year’s Six bowl game and his 38-year-old predecessor was immediately thrown into the fire.

Although his team lost the Fiesta Bowl in his first game as head coach, Freeman is already changing the culture in South Bend.

Not only were the Irish players absolutely thrilled when Freeman was announced, but most of the coaching staff chose to stay with him at Notre Dame rather than following Kelly and leaving for Baton Rouge. Both the players and coaches made it very clear how they felt about the coaching change.

Freeman himself was absolutely shocked by Kelly’s departure, but he is making the most of the opportunity. He is already leading a new era at Notre Dame and a recent story makes it very clear just how different things are in Indiana.

Based on one particular story, Kelly didn’t treat his graduate assistants particularly well. He once made Robert Saleh and Matt LeFleur — two current NFL head coaches — shovel snow and park cars at a holiday party.

During a press conference after spring football last week, offensive coordinator Tommy Rees spoke about the new culture. He said that Freeman was hanging out with grad assistants and treating them as equals.

Tommy Rees says he was hanging out in the GA office with Marcus Freeman and Mike Mickens the other day.

“I walked out thinking ‘I wonder how many places across the country you have the head coach hanging in the GA office like they’re his peers.’”

Quite the testament to Freeman. pic.twitter.com/IGp2VCcuIN

Everything that comes out about Freeman continues to be positive. He continues to impress as a coach and, perhaps more importantly, as a leader. The way that he hangs out with graduate assistants says everything that you need to know.

Clearly, the way that Kelly ran things at Notre Dame is no more. The Freeman era is off to a great start.