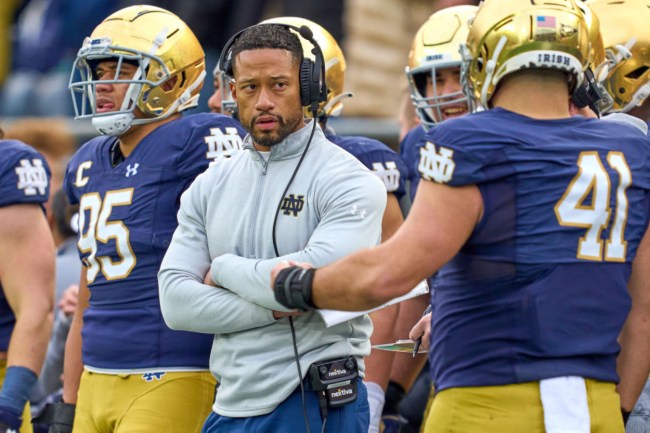 Like the rest of the college football world, Marcus Freeman was completely caught off guard with the news of Brian Kelly leaving Notre Dame for the LSU job.

It’s been a week since Kelly left South Bend for Baton Rouge and on Monday, Freeman was officially introduced as the newest head coach of the Fighting Irish.

With the dust finally settled, Freeman joined Colin Cowherd on ‘The Herd‘ on Monday and talked about his phone call with Kelly when he told him he’d be leaving for LSU.

“When he called me and told me, I was in complete shock,” Freeman explained. “I did not see it coming at all, my mind started racing.”

Freeman also got honest with Cowherd about Kellly asking him to follow him to LSU to be his defensive coordinator.

In the moment, Freeman told Kelly he’d take the job, but wanted to talk with his wife before any official decision was made.

"When he called me and told me, I was in complete shock. I did not see it coming at all. My mind started racing."

Now, of course, the rest is history. Kelly is down in Baton Rouge faking a southern accent and Freeman is joyfully being bombarded by Notre Dame players ready to go to work for the 35-year-old.

Freeman has been regarded as one of the best up-and-coming coaches in all of college football for a couple of years now. Many believed Notre Dame would perhaps try to hire Luke Fickell from Cincinnati as its next head coach, but kept it in-house with Freeman.