Ed Orgeron Once Showed Up At A Recruit’s House At 4 A.M. To Successfully Convince Him To Commit To LSU 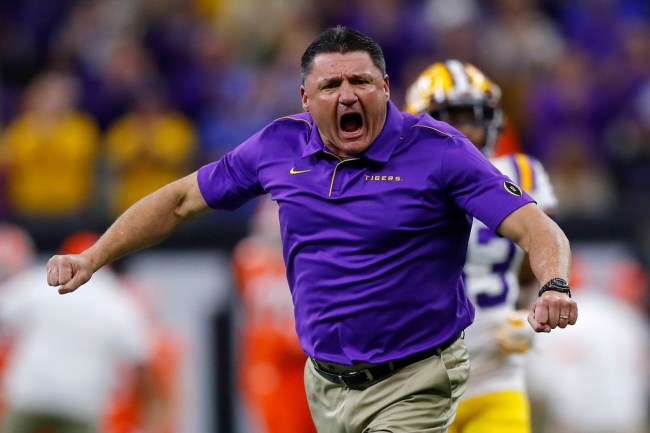 You have to be a special kind of person to coach football for a living and it seems that every single guy that helms a team at the highest levels of the game can be placed on a spectrum that ranges from “Slightly Off” to “Extremely Unhinged.”

If you need any proof, all you really have to do is watch these concentrated bundles of testosterone patrol the sidelines on Saturdays and Sundays as their forehead veins do everything in their power not to rupture but that’s often just the tip of the iceberg when it comes to illustrating how insane some of those dudes really are.

There is perhaps no head coach I love more than Michigan’s Jim Harbaugh, the idiosyncratic khaki lover who has attracted plenty of attention for his off-the-field antics—especially when it comes to recruiting.

Over the years, Harbaugh has gone to great lengths in an attempt to convince high schoolers to play for the Wolverines, including climbing a tree during a late-night visit for reasons I still don’t understand or watching Netflix with a prospective player during a sleepover.

However, a new challenger has entered the arena in the form of LSU’s Ed Orgeron.

The man who would hold the Guinness World Record for Gravelliest Voice on the Planet if such a category was quantifiable is certainly a quirky dude, as his pregame ritual reportedly involves chugging a Red Bull and punching himself in the face.

However, based on the national championship he recently won, he’s doing something right but he’s going to face an uphill battle next season based on how many members of this year’s roster won’t be returning as the Tigers attempt to defend their title.

One of those players is linebacker K’Lavon Chaisson, who showcased his skills at the NFL Combine over the weekend in addition to talking to Pro Football Talk about what led him to commit to LSU in the first place.

Based on his story about how far Orgeron is willing to go to recruit, it appears the school has a pretty good shot at bouncing back from the aforementioned departures.

Here’s what he had to say about the time he received an early morning visit from the man he’d eventually play for:

“I was gonna take my talents to Texas, and he kinda wasn’t having that.

He set up a home visit. I was on my way to Florida for an official visit and I was like, ‘Coach, we don’t have time for a home visit, because I’m about to head out.’ He came to my house at 4 in the morning, knocking on the door while everybody was asleep. He made it so he got his visit in.”

Sure, it might sound crazy but it’s really only crazy if it doesn’t work.