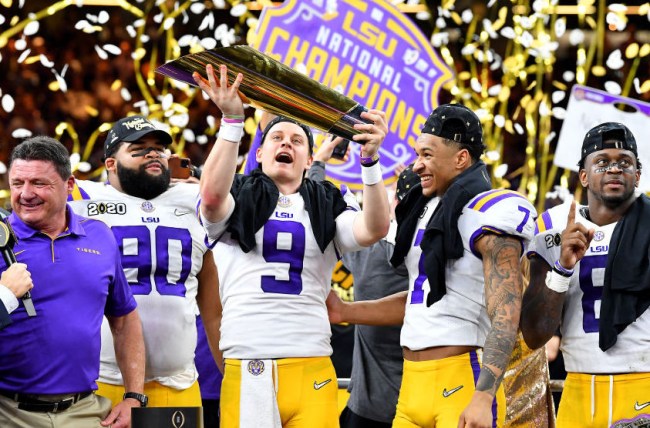 The common consensus ahead of the most recent college football season seemed to be that Alabama would almost certainly make its way to the national championship for the 17th time in a decade on the back of Tua Tagovailoa, who was slated to compete with Trevor Lawrence for the Heisman Trophy as the latter tried to help Clemson defend the crown.

There were certainly other teams and players in those respective conversations, and while Vegas listed LSU as a theoretical contender at 30/1 odds, sportsbooks didn’t expect Joe Burrow to play a critical role in their quest for a championship and it seemed like you might as well light your money on fire if you placed a bet on him to win the Heisman.

However, that didn’t stop one guy from throwing down $50 on the quarterback, and when everything was said and done, he cashed in his ticket for a cool $10,000 after Burrow received 99.8% of the vote.

The man in question ended up donating a sizeable chunk of his winnings but made sure he had enough left over to take the trip down to New Orleans for the College Football Playoff National Championship, where he got to see his Tigers topple Clemson and Burrow raise yet another trophy.

After the game, Kirk Herbstreit gave us an early contender for The Worst Take of 2020 when he ripped into LSU’s players for how they celebrated their victory and asked why they weren’t more concerned with making sure the program will continue to contend in the coming years.

Herbstreit apparently forgot that the nature of college football means teams are forced to continually retool and adjust to losing players to graduation and the NFL Draft, and on Wednesday, Football Scoop writer Zach Barnett highlighted just how much of an uphill battle LSU is facing if they want to repeat as champions next year.

plus Joe Brady and Dave Aranda.