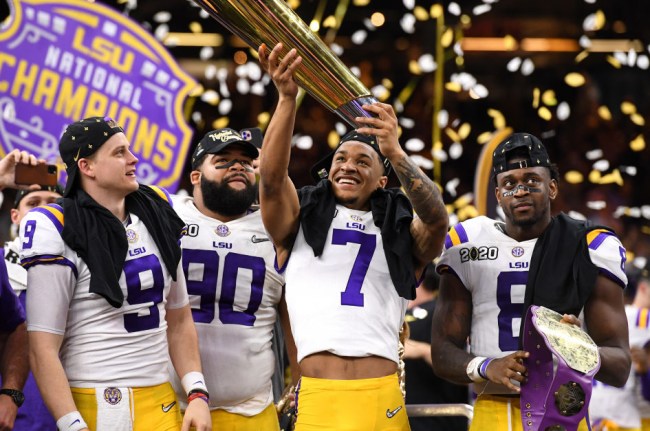 Every single kid who grew up practicing sports in their backyard or driveway has fantasized about sinking a buzzer-beater, hitting a walk-off home run, or making a miraculous touchdown catch on the final play of a game to clinch a championship on a national stage.

Sadly, very few of us will ever get a chance to live out those fantasies. In fact, most of us will never know what it’s like to win any kind of championship at all, and even if you managed to secure a Little League title or took home the trophy in a rec basketball tournament, you’re still left wondering what it’s like to celebrate the “real” thing.

On Monday, members of LSU’s football team lived out all of our childhood dreams when they finished their perfect season by beating Clemson in the College Football Playoff National Championship. The game wasn’t decided by any last-second dramatics but the Tigers still had plenty of reasons to celebrate and they proceeded to do exactly that.

Odell Beckham Jr. was on the field to take part in the festivities by plucking bills from a giant wad of cash and handing them out to the Tigers and he’d eventually join the team in the locker room, where players were threatened with arrest for smoking cigars and OBJ earned himself an arrest warrant by slapping a security guard on the ass.

A solid number of Ohio State fans spent the night of the game channeling their inner snowplow and throwing salt all over the place because they were mad at Joe Burrow for transferring or convinced the Buckeyes deserved to be playing instead of the Clemson team that got to the championship by beating them.

Now, Kirk Herbstreit has become the latest member of his alma mater to get in on the action, as he appeared on a podcast earlier this week and took it as an opportunity to pull down his fly and piss all over LSU’s parade because they had the nerve to…be happy they won?

“I will say this: as much as we’re celebrating this team, I wasn’t a real fan of the post-game stuff, the OBJ stuff with the money, the way they handled themselves at times.

The last time I checked, LSU players didn’t drag Beckham out of the stands and pin him to the ground so they could rob him of his money so I’m not really sure how you can place the blame on them.

To my knowledge, this is also the first time anyone on the team got to experience what it’s like to win a national championship so I think they’re justified in taking advantage of a moment that may never come again.

Additionally, I would assume someone who gets paid to talk about football for a living would be familiar with how the collegiate system operates but Herbstreit doesn’t appear to understand this is also the last championship the players who are graduating or leaving for the NFL will ever win.

Come on, Kirk. I know you never won a championship but that doesn’t mean you need to be mad at people just because they accomplished what you never could.