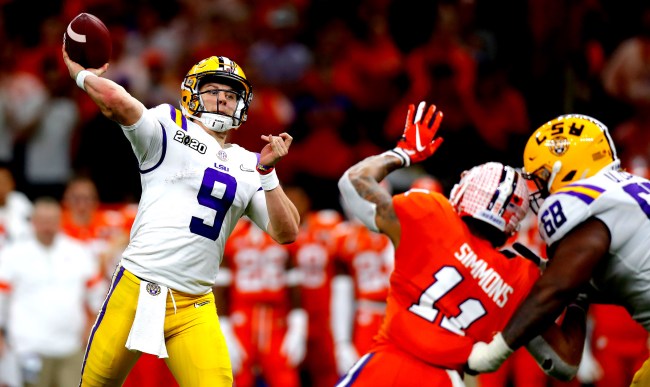 The logic behind that thought was because once upon a time in his college football career 2019 Heisman Trophy winner Joe Burrow was a Buckeye.

Make the most of it, @Joe_Burrow10. You know Ohio State fans will be rooting for you. https://t.co/M1CtTpmqdY

They also believed that Buckeyes fans should be rooting for LSU because the Clemson Tigers didn’t deserve to be in the title game because “the better team lost” in the semifinals in large part due to the referees.

Unpopular opinion for you Bitter Buckeyes… but I’m rooting for Clemson tonight. I subscribe to the “root for the team that beat you” school of thought 🤷🏾‍♂️

That line of thinking didn’t go over well on Monday night.

Screw Clemson and their coach Opie Taylor. I hope LSU and Burrow curb stomp Clemson by 50+. I hate the SEC but I hate Clemson even more. They didn’t earn the right to play in this championship game, it was handed to them by a terrible biased @SECOfficiating crew

RIP to your mentions

Nor did the game itself as many Ohio State fans spent the game complaining about the Buckeyes not being in it.

You know what would make this game better…. if Ohio state was in it 🤷🏼‍♀️

Ohio State is the best college football team in the country.

Ohio State is better than both of these teams.

Ohio State would’ve been a better match up and a more interesting storyline. #imstillsalty

Friendly reminder that Ohio State was significantly better than Clemson and should be in the National Championship right now.

the fact that ohio state isn’t playing tonight really makes me wanna put my fist through a wall but it’s fine I’m fine everything is FINE.

Can’t help but think Ohio State is better than both these teams. Only one team could beat us… ourselves pic.twitter.com/Xp1R9Kf1oX

This is a good time to remind everyone that Ohio State DOMINATED this Clemson team for the better part of 40 minutes.

If it wasn't for a #Buckeye, they would have had very little chance of winning a title………

Value the person who lost it all and got it back. #Geauxtigers #O-H love you bro @Joe_Burrow10 🖤 and congratulations you did that! pic.twitter.com/4RBhBmXkQe