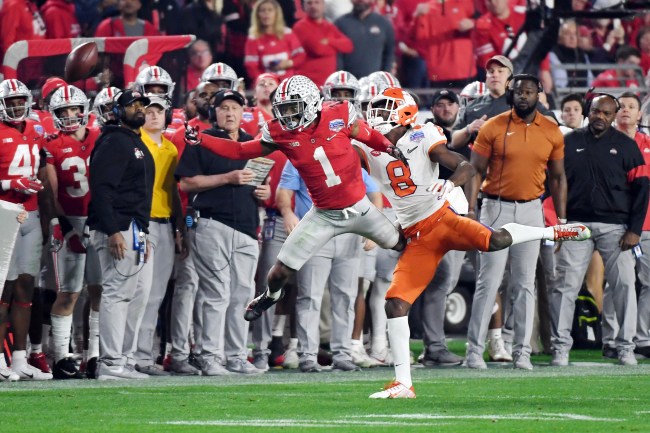 The Fiesta Bowl this season was a real heavyweight fight, pitting the Ohio State Buckeyes against the Clemson Tigers in an epic showdown between two historic college football programs. While the Buckeyes raced out to a 16-0 lead and looked dominant, things changed when the refs started throwing flags for some controversial penalties — which seemed to really upset Ohio State head coach Ryan Day after the contest.

With Clemson, ultimately, prevailing in the game, 29-23, the Fiesta Bowl will be remembered for a few missed opportunities by the Buckeyes — mainly all the red zone visits that led to field goals instead of touchdowns. Unfortunately, the College Football Playoff game will also be remembered for those botched referee calls, which impacted the game in a big way, giving Clemson momentum and even taking points off the board from the Bucks.

While a controversial targeting call in the second quarter was one penalty that fans may question — leading to the ejection of Buckeyes cornerback Shaun Wade — Ohio State really got screwed on a catch-fumble, scoop-and-score that was called back, which would have given them a lead. Here’s the play in question below.

Justyn Ross : 6 catches for 47 yards averaging 7.8 yards per catch (This was originally ruled a catch/fumble but the refs overturned it calling it a incompletion) pic.twitter.com/vxX9XIzeMb

Sure looks like a catch and football move to me, right? Unless you’re a Clemson fan or Ohio State hater, you probably agree, because, by the letter of the law, Clemson wideout Justyn Ross seemed to haul in the pass and try to tuck it away before Buckeyes cornerback Jeff Okudah could strip it. But Fiesta Bowl officials didn’t see it that way, and we now have an explanation as to why the defensive touchdown was overturned.

Here’s what the referee who made the ruling on the field, Ken Williamson, had to say about the play, describing what he saw during the bang-bang play.

Quoted from referee Ken Williamson on two pivotal calls in the Fiesta Bowl. Kudos to pool reporter Mark Faller and the Fiesta Bowl for getting this done. pic.twitter.com/ltCuvcBC5q

Props to Williamson for even going into this much detail about the Fiesta Bowl call, but, damn, it doesn’t help change the outcome for Ohio State. Still, at least fans get a rare glimpse of honesty from a referee for making such a big call — even if it looked like a catch and fumble to pretty much 80 percent of fans watching.