Police Have Issued A Warrant For Odell Beckham Jr’s Arrest 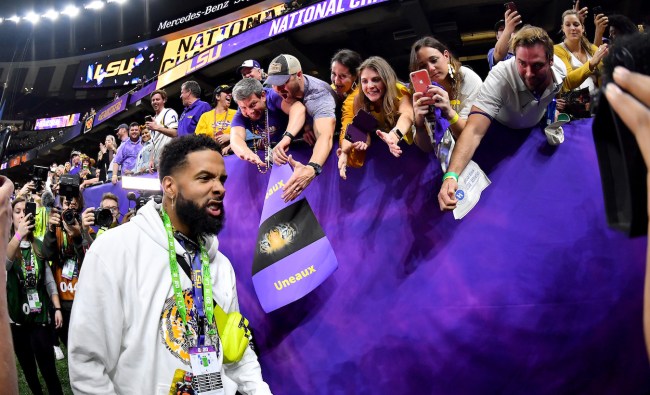 Update: The New Orleans Police Department has issued a simple battery warrant for Odell Beckham Jr., according to reports.

I have just graduated from Rutgers University and have begun my first job as a writer/editor in New York City. It’s the beginning of Fall and it’s a wonderful time because at just 22-years-old, I’m still able to drink like a college student while being able to party like a fully-employed adult. The bills of adulthood have yet to start to really pile up — health insurance, cell phone bill, etc — so I’ve got plenty of expendable income to inconsequentially waste on things like concert tickets, 50-inch TVs, and summer houses. Life is good.

Specifically, though, the day is Monday, October 10th and the New York Giants are just hours removed from a seven-point road loss to Aaron Rodgers and the Green Bay Packers. But what makes this game notable is not the final score, nor the fact that this Giants team would eventually go 11-5 and make the playoffs (the only time OBJ has ever been to the postseason in his career), but what Odell Beckham Jr. said and did prior to and during the game.

In an interview with ESPN’s Anita Marks leading up to the NFC showdown, Odell complained that he “wasn’t having fun anymore”:

“Football is my sanctuary,” Beckham told Marks. “It’s where I go to escape. It’s where I’m most happy. I’m not having fun anymore.”

Mind you, this is just weeks into his third multi-million dollar NFL season while he’s on the best team he’s ever been on in his entire career. Naturally, the blowback was immediate, as the tone-deafness of his comments was simply astounding. But because he’s Odell Beckham, in response to the criticism, instead of just putting his head down, working harder at practice, and helping his team grind, he wore fucking Joker gloves that said “just smile” to the Packers game:

Giants fans, I have bad news for you: Odell Beckham Jr. is a player who doesn’t ‘get it’ and never will ‘get it.’ Coming off some of the most scrutinized weeks of his career, Beckham had a chance to right some of his previous wrongs and get back into his flow against the Green Bay Packers. Instead, Beckham did was his always does: try to fix his on-field play with an off-field gimmick.

Let’s tackle the corniness of the issue first. Odell, you’re a professional athlete, not a Hot Topic teenager: stop quoting the Joker and trying to relate it to sports. You look ridiculous. I literally don’t think there is a bigger Batman & Joker fan on Earth than myself, and even I find this laughable.

The more important issue here is that these gloves show Beckham’s lack of maturity, as well as lack of a f*cking clue. OBJ, if you need corny, custom gloves to remind yourself to ENJOY PLAYING PROFESSIONAL FOOTBALL, you don’t deserve to be in the league. The reminder and motivation to have fun should come from within your soul, not through some superficial, attention-seeking pair of comic book themed gloves.

My point is if your star receiver needs some gimmicky gloves to get himself in the zone, he may never figure out how to do it on his own. [via COED]

Now, here we are in the present day — four years removed from my original analysis of the mercurial wide receiver — and his behavior remains the same if not arguably worse: childish.

So childish, in fact, that his bizarre decision to slap the ass of a police officer following LSU’s National Championship victory on Monday could have gotten him literally arrested.

“In the postgame locker room celebration, LSU players were smoking cigars, though smoking is illegal inside the Superdome. Cops were sent in to stop the smokers. While one of them was speaking to a player about putting out the cigar, Odell smacked the cop on the ass. The cop, surprisingly, didn’t even really address the incident. However, that is assault and Beckham could have been arrested on the spot. If you need an example of that happening, a man was arrested in December when he smacked a reporter’s butt during a run. So yeah, there’s precedent for arrest at minimum.” [via The Big Lead]