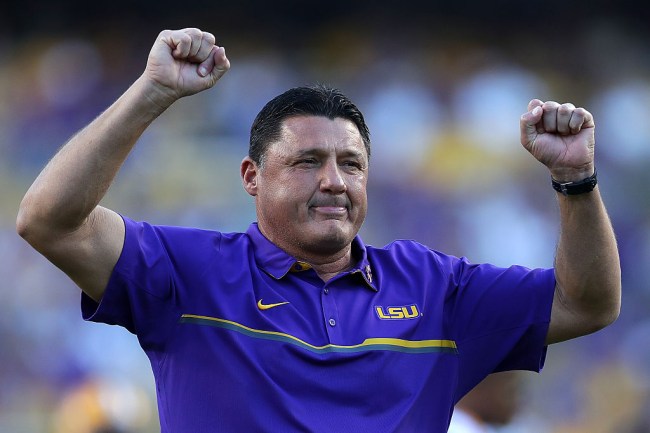 The world of college football is home to plenty of characters defined by their eccentricities, whether we’re talking about the many musings of modern philosopher Mike Leach or the famously insane antics of khaki aficionado Jim Harbaugh. I used to think it was impossible to top the latter when it comes to pure, unbridled craziness, but after hearing a story about LSU head coach Ed Orgeron, I’ve had to seriously rethink that stance.

AL.com recently sat down with some former LSU players to talk about their experience playing under Orgeron, and several of the players recounted the coach’s pregame ritual that starts with chugging a Red Bull and finishes with a shirtless Orgeron repeatedly punching himself in the face.

Danny Etling, a QB who was selected by the Patriots in the seventh round of this year’s draft, explained the slightly unconventional strategy Orgeron deploys to get himself— and his team— in the proper mindset before heading out of the tunnel:

“Before one of the games, he’ll come down and drink a whole Red Bull, smashes it on his head, lifts off his shirt and he’s punching himself in the jaw getting us ready, pumped up to play. That’s Coach O for you.”

I’m just glad to know we live in a world where the 56-year-old head coach of a major college football program prepares for games the same way some college kids get ready for a night out (just without the punching and with a lot more shots of vodka).