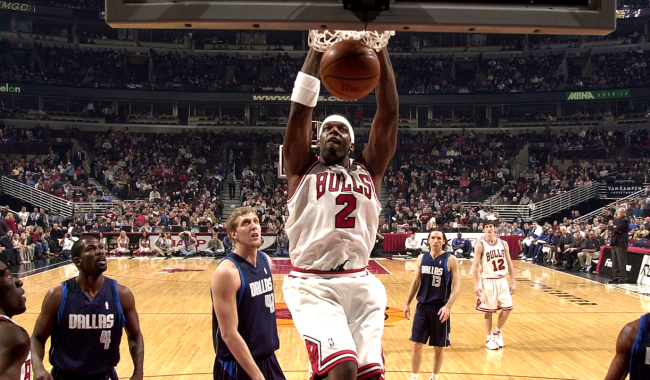 After not playing basketball until the seventh grade, in his senior season at Thornwood High School in South Holland, Illinois, Eddy Curry was named the 2001 Illinois Mr. Basketball.

Curry then signed a letter of intent to play at DePaul University, but instead chose to enter the 2001 NBA Draft.

In that draft, the Bulls made him the fourth overall pick, two picks after Chicago acquired another big man straight out of high school, Tyson Chandler.

During his years with the Chicago Bulls, Curry leading the NBA in field goal percentage in his second year, and was leading the team in scoring in his third year when he was hospitalized with an irregular heartbeat.

The Bulls, worried that Curry might have a congenital heart condition, despite several cardiologist clearing him to play, insisted that Curry take a DNA test to rule it out. Basketball stars Reggie Lewis and Hank Gathers had recently passed away from such conditions.

Chicago even offered Curry an annuity of $400,000 per year for 50 years if he took the DNA test and failed. He still refused.

The issue became so heated, with Curry refusing to take the test, that the Bulls ended up trading him to the New York Knicks

“I would never put a player on the floor in a Chicago Bulls uniform if I didn’t do everything in my power to find out all the information that was available,” Bulls general manager John Paxson said following the trade. “You can debate genetic testing ’til you’re blue in the face. But from what I know, from what I’ve learned over the last six months, that test could have helped us determine the best course of action.”

This week, Eddy Curry sat down with Vlad TV to talk about that time period in his career as well as several other related topics.

“It was literally just one episode,” Curry recalled. “I can remember I was playing, we were playing the Bobcats and before the game we shooting around and stuff and I just kind of felt this little weird rhythm. Like my heart, it was just like an extra beat, it was beating normal, but it would just be like an extra beat every now and then.

“And I remember sitting down, I sat down at half court with Tyson, because we always would sit there and just talk about the game or whatever, and I’m like I feel like an extra beat in my heart right now. And he’s like, man, stop playing, cause a lot of time a lot of guys in those type of cities back then, they kind of really didn’t want to play in those type of games. The Bobcats weren’t one of those cities you would really get up for, so he’s like man, stop playing bro, we got to play this game. I’m like, man, ain’t about playing the game, Tyson, I don’t duck games, bro, I really feel a weird beat bro! And he was like, well go tell Fred, man, Fred was our athletic trainer.

“So I go in the back, I’m like Fred, man, I got this this extra beat going on I don’t know what it is. So he puts the the stethoscope on me and he was like, yeah, I definitely hear it. So he went and got the other team physician and then they got their main doctor for their team and they were like, you know what, there’s definitely something, let’s admit him, just to be sure.”

After his hospital stay, the Bulls then put Curry on a flight back to Chicago to get checked out again at another hospital. While there, his irregular heartbeat stopped occurring. So they sent him to several other heart doctors around the country.

After several tests, Curry said the doctors still couldn’t find anything wrong with his heart.

It was at this point the Bulls requested Curry take a DNA test to rule out any genetic defects.

Curry says he was going to take the test because he just wanted to get back on the court, but his agent told him not to because he didn’t want Curry setting a precedent that could affect other African-Americans coming through the league.

The Bulls then tried to negotiate with Curry in order to get him to take the DNA test.

“The crazy thing was my agent had did the math … on it, the Bulls owed me like, I don’t know what it was for that next year, I had an option that year to get like 5.7 or 8 point whatever, whatever it was, they basically were gonna put that money up and pay me interest off that money. That’s all they were really doing. And I kind of felt like at the time, I’m like, man, that don’t really sit well with me.”

Curry says at that point the Bulls said that even if he picked up his player option for the following season they weren’t going to let him play. They did, however, tell him that if he could find a team willing to trade for him they would do a sign and trade, which he ended up getting with the Knicks.

“I was devastated because I felt like I really built something in Chicago,” said Curry. “I felt like we were really finally winning, man. I was going to get a chance to see what it was like to play in front of that crowd, man. It just devastated me.”

Check out the full interview with Eddy Curry, including parts one and two below.