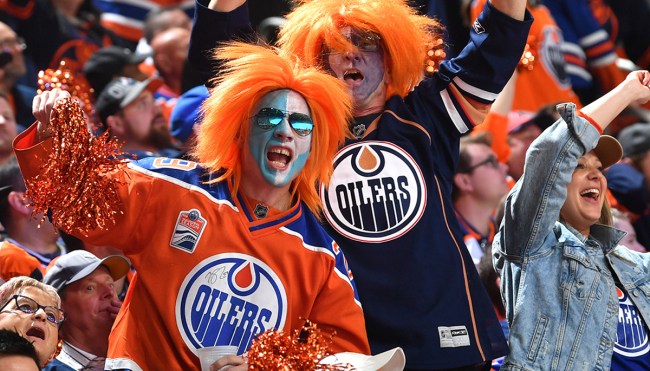 On Thursday night, the Edmonton Oilers punched their ticket to the Western Conference Final for the first time since 2006 after Connor McDavid did what he does best and sent the Flames home by netting the series-clinching goal in overtime.

CONNOR MCDAVID ADVANCES THE OILERS TO THE WESTERN CONFERENCE FINAL WITH AN OT GOAL.

This year’s Stanley Cup Playoffs marked the first time the two clubs at the center of the longtime rivalry known as the “Battle of Alberta” had met in the postseason since 1991, and it’s safe to say it was worth the wait.

Sure, the Flames were only able to post a single win, but both teams treated us to some fantastic hockey over five games that featured plenty of bad blood, a penalty call for the ages, and a wild record-setting sequence where fans were treated to a total of four goals in a little over a minute of play.

This clip is 4:46. It’s in real time with no cuts and contains 4 goals and every replay.

As a result, it wasn’t the kind of series you wanted to turn away from for too long—and based on a chart that was collected by EPCOR following Game 3, it would appear plenty of people in Edmonton did everything in their power to avoid missing a single second.

Earlier this week, the utility company shared a graph it put together after taking a look at water usage in Alberta’s capital city during Sunday night’s contest. Based on the data, it’s pretty safe to assume that fans at Rogers Place weren’t the only people who made a beeline to the bathroom as soon as each period ended due to the dramatic spike in demand that accompanied each break in the action.

The first few games of a playoff round are only an elimination game between periods! Check out the peaks and valleys of water consumption as our water treatment teams worked hard to make sure #Oilers fans caught every second of the action. #BattleOfAlberta #LetsGoOilers #yegmedia pic.twitter.com/yUwD7LZ5Y6

Whoever decided to monitor those numbers in the first place deserves a raise.