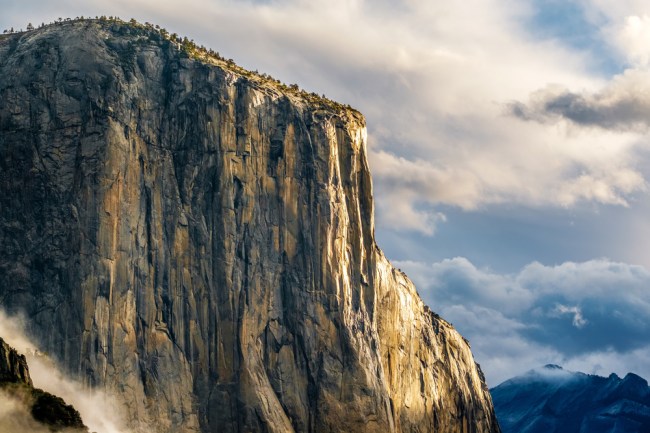 Two rock climbers just set a new speed climbing record on the Nose of El Capitan in Yosemite. This climb is considered by many to be the most dangerous rock climb in America.

The climbing pair ascended the 2,900-foot, 90-degree rock face in just 2 hours and 19 minutes. In doing so, Jim Reynolds and Brad Gobright broke the previous speed record on El Capitan’s nose by 4 minutes, a record that was last set/broken back in June 2012 by Hans Florine and Alex Honnold with a time of 2hr23min46sec.

The official time of the new speed record set by Brad Gobright and Jim Reynolds is 2:19:44. As you can see from the caption below, they knew they’d secured the record while ascending the final stretch which must’ve been a truly exhilarating experience for the climbing partners.

In an interview on Sunday, Brad Gobright talked about their record-setting climb and the fears they had going into it after one of their friends, a fellow climber, suffered spinal paralyzing injuries days before after falling 100 feet off El Capitan’s Boot Flake and she landed on the boulders down below:

“The big thing that Jim and I were worried about was that to some extent you have to kind of put safety behind you when you’re trying to move that fast,” Gobright, 29, said in an interview Sunday. “It requires a lot of focus, much more than a regular climb. Speed climbing requires your full attention.”
Just 10 days earlier, a friend of theirs, Quinn Brett, suffered paralyzing spinal injuries when she fell 100 feet off the Boot Flake feature of the Nose and landed on boulders below. She, too, was attempting to climb the route in a day, though not for a speed record. (via SFGate)

According to SFGate, more than two dozen people have died while climbing Yosemite’s El Capitan since 1905. When the pair set their speed record on Sunday the air was thick with smoke from fires to the north, and Gobright said the climb was more crowded than he’d ever seen it before. Not exactly the ideal conditions to set the all-time speed record on El Capitan.

However, when you’re climbing as a pair you can split up the amount of gear that’s being carried amongst two people instead of one person carrying all the requisite gear by themselves. This enabled the two expert climbers to speed up the mountain and break the record.

Here’s a look at what it’s like for Gobright and Reynolds to climb El Capitan together:

For a full account of the climb and what this means for the sport of Rock Climbing, you can CLICK HERE to head on over to SFGate.com.