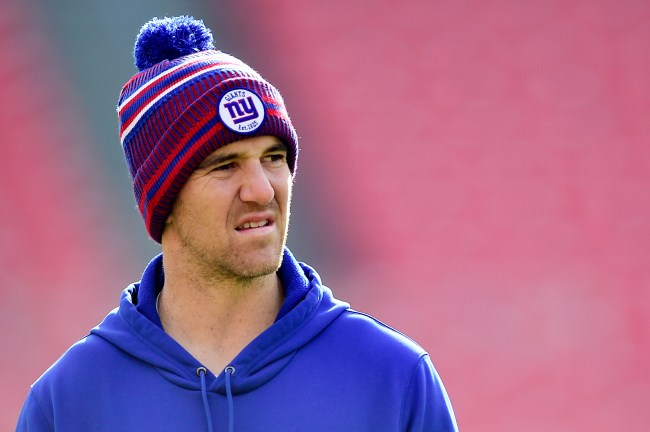 Eli Manning’s time with the New York Giants is coming to a close. The 2-time Super Bowl winner was benched for most of the season in favor of Daniel Jones but Eli’s been gifted the chance to play out the last few games of his contract which expires this year.

Throughout his sixteen seasons in the NFL, Eli Manning has brought in a total of $252,280,004 in contract earnings. That’s not accounting for endorsements. He’s a VERY rich man. And rich men always have ‘a guy’ for everything, don’t they?

Flying off to Milan for the weekend and need some nose beers when you get there? Your rich friend has ‘a guy’ for that. Flew into NYC last-minute on a Friday night and need a restaurant reservation that doesn’t suck? Someone’s got ‘a guy’ for that.

In a recent ESPN profile of Eli Manning, former New York Giants kicker Lawrence Tynes revealed that Eli Manning had a Beer Guy™ at every single stadium in the NFL. A person who was tasked with bringing Eli a 6-pack or 12-pack of beer after every game, regardless of the outcome, so Manning could crush beer sodas on the team bus with his fellow veterans.

Eli Manning always drank beer on the team bus. It was a Broadway Joe kind of thing to do, and a fact that might run counter to an image Manning spent absolutely no time crafting. But win, lose or draw, Manning would find someone on the road to buy him a six-pack or 12-pack that he would carry to the back of the bus, on ice, and share with some veterans as they discussed the game on the ride to the airport.

Even then, Manning’s consistency stunned his New York Giants teammates. “It was unbelievable,” said Lawrence Tynes, the kicker who won two championships with the quarterback. “He had a guy in every f—ing stadium in the league to get him that beer.” (via ESPN)

I really wish he would’ve elaborated a little on the actual types of beer that Eli Manning would drink most often. If I had to make an educated guess, I’d say that Eli’s a Bud Light or Miller Lite guy but I can easily envision a world where he only drinks craft brews after games.

This ‘Beer Guy’ revelation came after footage surfaced recently of Eli Manning and Daniel Jones playing flip cup at a dive bar in New Jersey after the Giants’ fourth win of the season.

In all likelihood, this Sunday is Eli’s last start for the G-Men and quite possibly his last start in the NFL. I’ve hated on Eli as much as anyone over the years for his .500 career win percentage but it’ll be a sad day for football fans everywhere when there’s no longer a Manning in the NFL.