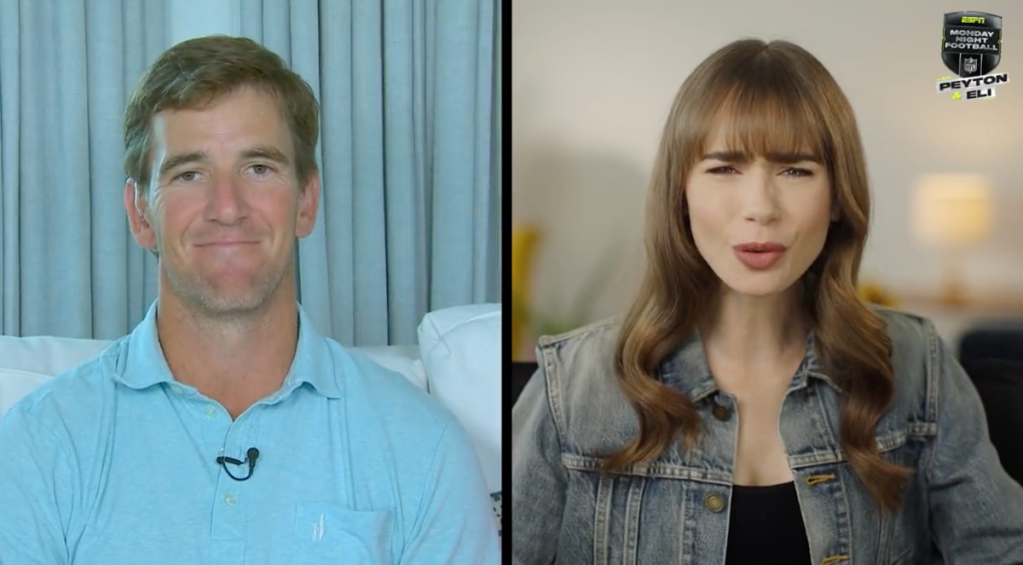 The Manning Cast is officially back, folks. Eli Manning took to Twitter with a video from the Omaha Productions account to make the announcement and he also used it as an opportunity to dunk on his brother Peyton.

Well, at least that’s what I think is going on here. It’s possible Eli is just being a nice guy. But for the announcement, Eli enlisted the help of Emily in Paris star Lily Collins who Eli says Peyton is a massive fan of to help tell the world the Manning Cast is back.

Eli kicks if off with ‘as you know, Peyton is a HUGE Emily in Paris fan.’ To which most NFL fans would say, huh?

We are back for season 2 on @espn! pic.twitter.com/aeUScgOtNF

Eli quickly showed that Peyton might be not as crucial to the Manning Cast as previously thought. Because Lily Collins slips into the role of Peyton Manning with ease as Eli Manning looks on befuddled.

When will the Manning brothers be on this season?

There will be 10 episodes this season featuring Peyton and Eli. The 2022 Manning Cast schedule is as follows:

NFL Fans Are Stoked The ‘Manning Cast’ Is Back

The Manning Cast was arguably the most surprisingly delightful aspect of the 2022 NFL season. Nobody saw it coming and it quickly became the preferred way to watching Monday Night Football for many. And now that it’s officially announced as back, fans are stoked:

Packers-Rams getting the ManningCast treatment. Not a surprise.

Also, this crossover is built for my wife. Combines her love of Emily in Paris & Peyton Manning. https://t.co/ZOtNZXlFLn

Anyone who had ‘Emily in Paris’ announcing the reutn of the Manning Cast on their BINGO card should go buy a lottery ticket.