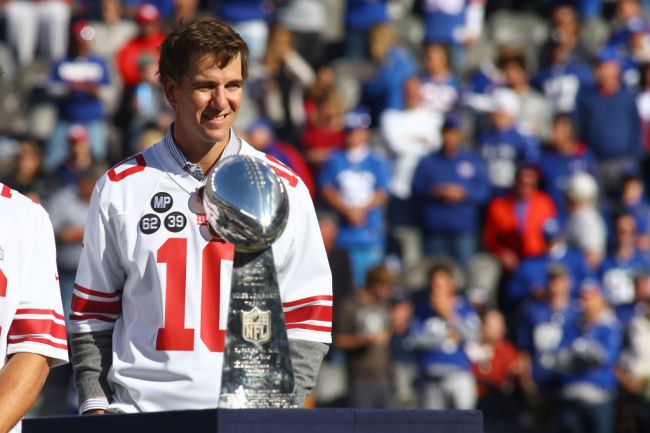 If there is any one thing about his NFL career that Eli Manning will not let anybody forget, it’s that he beat Tom Brady and the New England Patriots twice in the Super Bowl. It seems to come up a lot when Eli is asked to do some public speaking.

In fact, it even came up recently at an event where Robert Kraft was being honored. Apparently when you’re honoring Robert Kraft it’s customary to let the guy who ruined his perfect season speak.

While honoring Kraft, Manning decided to throw in a little joke at his expense. Eli told the crowd that his mom wanted to apologize for all of the Super Bowls her sons cost Kraft.

.@EliManning: "My mom Olivia sends her apologies: She said if it weren’t for her, Robert Kraft would have at least 10 Super Bowls.” pic.twitter.com/xVexv8PXti

The Mannings certainly didn’t help the Patriots on their quest to become football’s version of the 60s Celtics. Peyton and Eli combined to eliminate the Pats from the playoffs 5 times, with Eli doing it twice in the Super Bowl. They also each won 2 Super Bowls to interrupt Tom Brady’s reign of terror in the NFL.

Despite the Manning family’s 5-2 playoff record against Brady and the Patriots, it seems the last laugh belongs to the GOAT. He won more rings with the Pats than the two Manning brothers won in their careers combined and then added another in Tampa Bay.

Sure, the Patriots probably wouldn’t have had any issue with piling up 5 more rings in those years, but instead it seems we’ll just get to hear Peyton and Eli make jokes about the Pats for the rest of their lives instead.