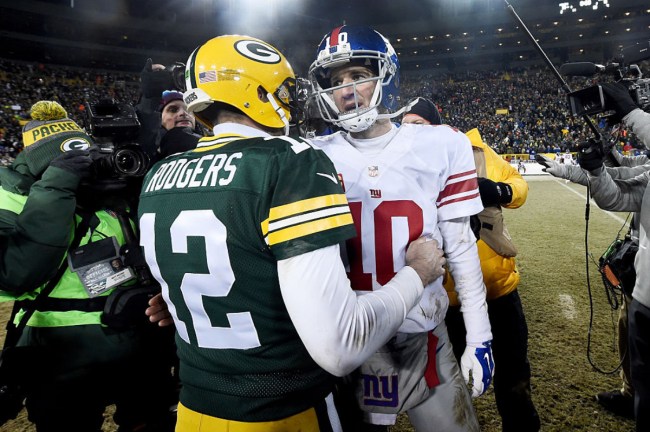 While Aaron Rodgers has made it clear that he hasn’t made a decision about his future, he’s officially on the clock. Rodgers could force a trade out of Green Bay, retire from the game, or finish his career with the Packers, which is what Eli Manning thinks is his best option.

Manning played his entire career with the Giants and is now a legend in New York, but he did go through some adversity at the tail-end of his career being replaced by Daniel Jones.

Ultimately, Manning wound up sticking things out in New York for one final season in 2019 and doesn’t have any regrets with that decision.

Given his own experiences, watching his brother Peyton leave the Colts for the Broncos, and talking to other players who have left for other teams late in their careers, Manning thinks Rodgers should stick it out in Green Bay.

“It was important for me to finish my career with the Giants, and I would think it would be important for (Rodgers) as well, just because of the legacy that he has, the history of Green Bay, being there as long as he has been, winning a championship and winning MVPs,” Manning told ESPN.

“It’s not always greener on the other side. That’s what I had learned from talking to other people. You can go somewhere, and it’s not necessarily going to be better; it’s probably going to be worse.”

Manning is aware that egos, both Rodgers’ and the higher-ups in Green Bay, could alter things drastically.

“Usually what happens is the egos get involved. It’s either his ego or the GM’s, and for some reason that’s when there’s usually separation. When a quarterback’s been there a long time and leaves, it’s because the egos can’t get along with everybody.”

It’s tough to imagine Rodgers retiring after such a poor performance against the 49ers in the Divisional Round. All options are on the table at this point, however, and we certainly know Rodgers moves at the beat of his own drum.