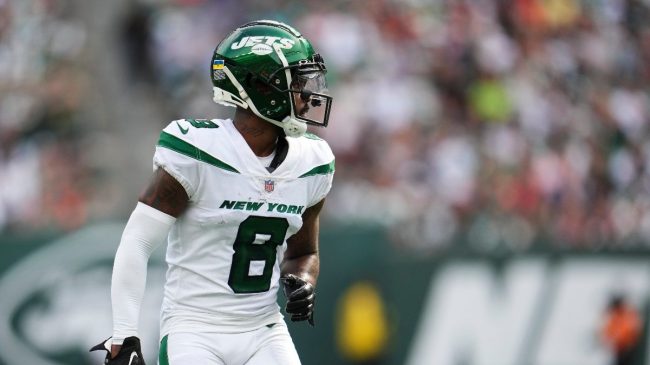 The New York Jets were unable to overcome the New England Patriots. Especially after Zach Wilson struggled throughout the contest throwing three interceptions. However, after the game, wide receiver Elijah Moore seemed fed up with his quarterback.

The Jets video team shared a quick clip of Moore in the locker room discussing the game. He’s already requested a trade from the organization and now it’s extremely apparent he’s tired of Zach Wilson being his quarterback. When asked about his on-field chemistry with Wilson, Elijah Moore claims, “I don’t even know, I couldn’t even tell you. I don’t get the ball. I don’t know.”

Elijah Moore was asked about his on-field chemistry with Zach Wilson:

Yikes. That is some serious turmoil in the Jets’ locker room. It’s never a good sign when a wide receiver openly admits his frustration to the media in the postgame interview. Especially considering the team is competing well on the year, despite the tough loss to the Patriots.

The NFL trade deadline is right around the corner, so maybe it’s time to let Elijah Moore go. He’s been rather vocal about his displeasure. Additionally, the drama surrounding him and Zach Wilson could leak into the remainder of the season.

With that in mind, keep an eye on Elijah Moore with the trade deadline around the corner. New York has until November 1 to make a potential deal. Considering Moore is openly frustrated with the team and his quarterback now might be the time to pull the trigger.