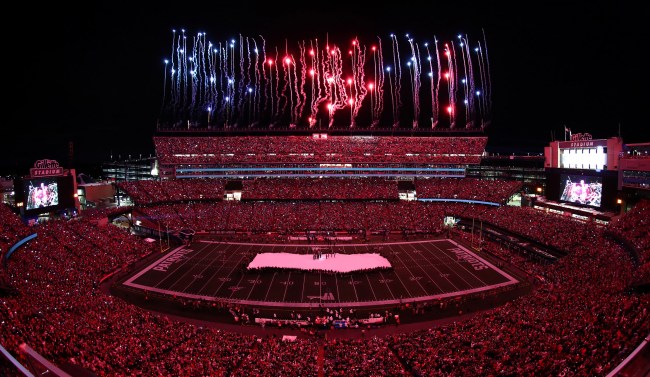 Considering how lopsided Sunday night’s Patriots–Steelers game was it’s not very surprising that NFL fans on social media were looking for something, anything, to keep their interest in the snoozefest of a broadcast.

After all, how many times can one make jokes and criticisms about Antonio Brown joining forces with the Evil Empire of the league?

Even the folks at NBC were looking for something interesting to add to the telecast, panning the crowd and landing on the star of one of their new shows, New Amsterdam, former The Blacklist and 90210 actor Ryan Eggold.

This moment in the broadcast might have gone unnoticed by most on social media, but it didn’t because in a Katherine Webb-ish moment, fans immediately wanted to know who the lovely young lady was sitting next to Eggold.

Who is that girl with Ryan Eggold

Ryan Eggold at Pats game. NBC showed him talking to his date. She was very interested in her phone. Never looked at him. #Keeper

Naturally, it didn’t take the internet long to figure exactly who the young lady is and it turns out it was Elizabeth Turner. No, not the character in the Pirates of the Caribbean movies, the model.

You say you aren’t familiar with her? A lot of people are, because she has over 916,000 followers on Instagram.

Turner, a Duke graduate, is also rumored to have dated Leonardo DiCaprio after the two were spotted on a yacht together in St. Tropez in 2017. So there’s that.

She and her sister Sarah Turner also are known for suing Snapchat in 2011 which involved an email Snapchat founder Evan Spiegel sent to BroBible. Go figure, huh?

Me when I saw Elizabeth Turner sitting with Ryan Eggold: pic.twitter.com/WGuLiuLdSR

Look at how beta this actor they pimped on @SNFonNBC. Ryan Eggold gazes adoringly while leaning towards his date while she’s ignoring him, looking at her cell phone. Don’t be like this guy. pic.twitter.com/IqkuCMe1B6

who the fuck is ryan eggold