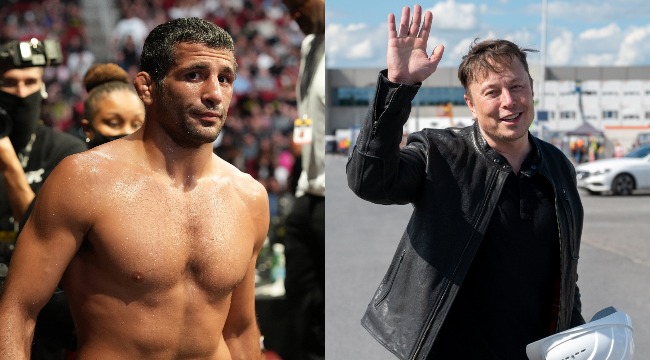 How many more strongly worded emails does Beneil Dariush need to fire off to Tesla HR before his damn car appears in his driveway?

In the immediate aftermath of the biggest win of his career, the 32-year-old took precious time in the ring to voice his Speak To A Manager moment.

UFC fighters usually call out their next opponent after a win.

Beneil Dariush decided to use his opportunity to call out @elonmusk about his wifes car 😂 pic.twitter.com/MJfGerWppZ

“Joe, I wanna call out your buddy. Elon Musk, where is my wife’s car, bro?” he demanded, sending Joe into a hysterical laughing fit. “I’ve been waiting six months,” he continues, “I’ve had a baby, I need a good car, I have to protect my daughter. Let’s go, Elon, get me my car!“

In the post-fight presser, Dariush revealed that he ordered a Tesla in December in the lead-up to the birth of his daughter, was promised delivery in March, and still hasn’t received it nearly three months later.

Coming soon. Sorry for the delay!

Dariush is far from the only person suffering through Tesla delivery delays. According to Inside Evs, in the case of Model X, after the first cars were expected in February 2021, the expected delivery date is now moved to October according to the latest reports. New orders are expected in January-February 2022 already.

Appears that @Tesla customers with orders for Model S/X refresh were updated this morning regarding expected delivery.

.@camposb774 ordered a refresh Model X on Feb 20th. The order had previously stated delivery for May, and has now updated to October.

Thanks for the info 🔥👍🏼 pic.twitter.com/cbHaPynesj