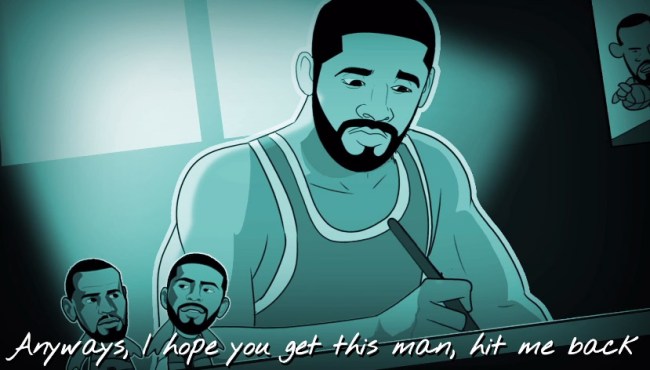 The drama between Kyrie Irving and LeBron James has been one of the stories of the summer only surpassed by the circus that is the Conor McGregor vs. Floyd Mayweather fight.

We’ve had James dropping his usual passive-aggressive cryptic tweets. We’ve had Irving taking not-so-subtle jabs at LeBron on Snapchat. We’ve had stories about how James is 100% leaving Cleveland when his contract is up. And don’t even get us started on the whole Da Real Lambo nonsense.

So the fact that the folks over at AOK created a tremendously good parody using Eminem’s ‘Stan’ and it absolutely nails all the finer (and hilarious) points of this drama is just perfect.

Check out these lyrics then watch the A++ video below…

DIDO: LeBron is mad I’m wondering why. I asked for a trade at all I scored 40 in the Finals. But I can’t please LeBron. And even if I could I’m not Chris Paul. With their picture on a boat *1. It reminds me that it’s not my Cavs, LeBron runs the Cavs.

KYRIE: Dear Bron, I wrote you, but you only subtweetin. I left my cell, email and my address in Cleveland. I sent two letters to Dan Gilbert, you must not’ve got ’em. He probably fell off the side of the Flat Earth or somethin’. Sometimes trade requests become too sloppy once they’re public. But anyways, fuck it, what’s been up, man? How’s our teammates? I just wanted to be the man, and a chance to lead- If I win a MVP, guess who I’mma call? I’mma call Kobe.

I read about Derrick Rose too, I’m sorry. He signed for the Vet Min cuz every team didn’t want him. I know you probably hear this every day, but I’m your best teammate. I even hit The Shot after you made The Block on Andre. I got a room full of our posters and our Flatheads, man. I like the ‘Ship we won in ‘16 too, that ‘Ship was phat. Anyways, I hope you get this, man, hit me back. Just to chat, truly yours, your best teammate, this is Kyrie.

DIDO: LeBron is mad. I’m wondering why. I asked for a trade at all. I scored 57 against the Spurs. But I can’t please LeBron. And even if I could he won’t commit to stay. He’s leaving to play with Ball. It reminds me that it’s not our Cavs, never was our Cavs.

KYRIE: Dear Mr. I’m-Too-Good-to-Commit To Cleveland. This’ll be the last message I send before I’m leaving. It’s been three seasons, I’m second fiddle — do I deserve it? I know you got my last email. I even CC’d Brian Windhorst. So this is my message I’m sendin’ you, I hope you get it. I’m in the gym right now, I’m scorin’ 30 next season. Hey, Bron, I wanna go to the West too, you dare me to go? Stephen A Smith said if you saw me it’d come to blows. And all I wanted was a chance to handle the ball. I hope you know I ripped all of our Fatheads off the wall. I loved you, Bron, we coulda played together — think about it! It’s ruined now, I hope you don’t win and you dream about it. And when you leave I hope you lose And you scream about it; I hope your conscience eats at you. Cause you can’t win without me. See, Bron— shut up, Dan! I’m tryin’ to talk. Hey, Bron, that’s Dan Gilbert screamin’ in the hall. But I didn’t stab his back, I let him know first, see I ain’t like you. ‘Cause if he trades me, he’ll get a good player back too. Well, gotta go, I’m almost off the Cavs now. Oh shit, I forgot, how am I supposed to win a title now?!

DIDO: LeBron is mad. I’m wondering why I asked for a trade at all. I haven’t even hit my prime yet. And I wanna leave LeBron. But even if I stayed he’s on the decline. He’s almost 33 years old. It reminds me that it’s not our Cavs, Durant ruined the Cavs.

Good luck getting that out of your head today.

Cast your vote and let us know!