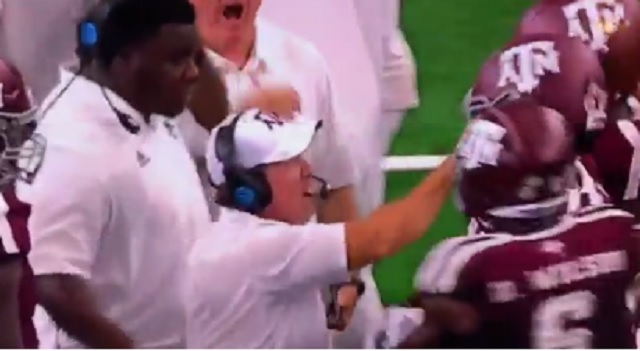 The Texas A&M Aggies looked like they were going to have an easy win on Saturday after a hot start but then struggled in the second half but were able to hold on to a 24-17 win.

During the team’s poor second half play and angry Jimbo Fisher berated sophomore linebacker Tyrel Dotson and pulled on his facemask.

In the second half, the struggles caused Jimbo Fisher to throw a fit, as you can see in the video below:

Jimbo is not pleased. pic.twitter.com/JMvlk9zDEb

On video going around of Jimbo Fisher grabbing Tyrel Dodson's face mask… Jimbo said he told him "make the play. Shut your mouth." Was worried LB was going to get tossed for fighting.

So we just gonna let Jimbo Fisher get away with treating his player like a rag doll
pic.twitter.com/PbecEn4nJs

If you making 75 million a year and I’m not making no money. Don’t touch me unless you putting money in my pocket. Yell all you want. Don’t put your hands on me

I made it to the NFL and Mack Brown never put his hands on me like this. Sooo 🤷🏾‍♂️

I have no problem with criticism. Don’t put your hands on me. Cuz as a player I can’t return the favor

Acho wasn’t the only one who felt Fisher went overboard on the sidelines.

Absolutely should be suspended. The player would be. Don’t fine him, suspend him. https://t.co/orFGlQkC3Z

I’m old school and the snowflake society has an answer for everything, just ask em. But, if a player grabbed a coach like Jimbo grabbed a player, the country would lose their collective minds. One day a player is going to right hook a coach, I guarantee it! Then what!