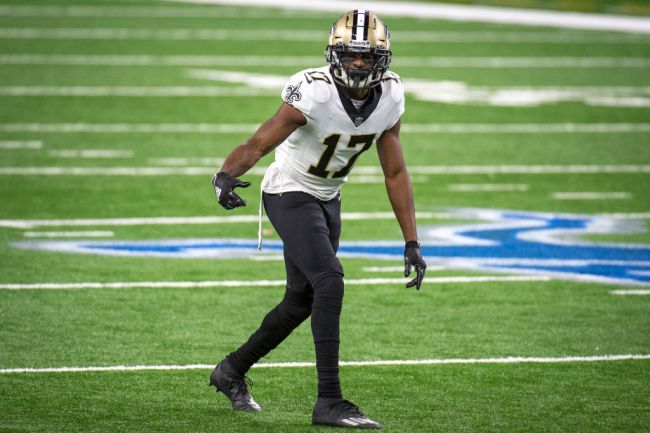 New Orleans Saints wide receiver Emmanuel Sanders tested positive for COVID-19 over a week ago and won’t play against the Chicago Bears this weekend.

Sanders’s experience with the virus has been scary and possibly life-changing.

The 11-year vet made his appearance on Uninterrupted’s “17 Weeks” podcast – he’s a co-host along with Jamal Adams and Eric Ebron – and discussed his diagnosis and how he realized something was wrong.

“Showed up to practice. I wasn’t feeling well. It was just weird. And my wife, you know, she told me like the day before she was like, I can’t taste or smell anything. So that kind of like threw me off a little bit.

So then the next day I show up to work and I’m running routes, but I’m just like, I just don’t feel good.

So I ended up telling the trainers. I told the trainers I wasn’t feeling well. And then they start asking me questions.

And then I told them about my wife. And after that they took me to get tested and I got tested and that test came back positive.

And then they sent me to another doctor and that came back positive and I was just like, what the hell?”

The Saints receiver then got brutally honest about coping with the disease from a mental aspect and the fear of the unknown.

“Every night I go to sleep I’m like, ‘Lord, please, let me like wake up in the morning feeling good. Like, I don’t want to wake up in the middle of the night and like, can’t breathe. And like, s–t just goes south, right?

That’s like my biggest fear in watching that s–t, it intensifies my fears, right? Because people can say whatever you want and everybody could say, ‘Oh yeah, I’m not scared to get COVID.’

Nobody knows anything about this virus. You don’t know how your body’s gonna react and you don’t know at any moment, like if sh-t will go south, right?”

Sanders told his co-hosts about the odd side effects of the virus and the constant “glitching” he feels each night.

“Like literally I was laying in bed just shivering.

Every night, my fever comes back. At night time around eight o’clock we both get like these weird like loopy feelings.

Sanders is recovering and expects to be back on the field for a game against Tampa Bay next Sunday.