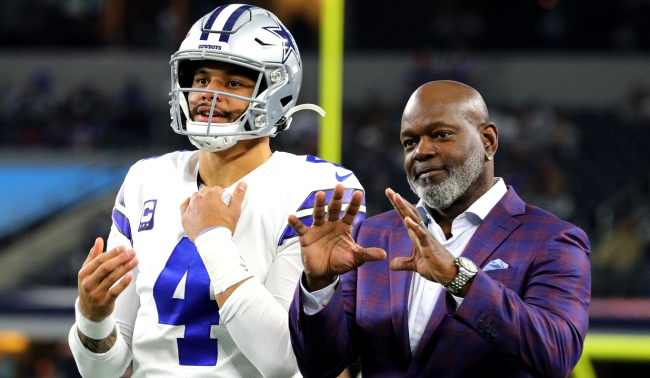 Hall of Fame running back Emmitt Smith played 13 seasons for the Dallas Cowboys racking up 20,174 total yards and winning three Super Bowls. So he certainly has a vested interest in seeing the team succeed.

He shared his unique perspective on the current Cowboys in a new interview with Sportscasting.

“I don’t think our team has understood the mental aspect of the game except for what’s required and the timeline of the sustainability of that mental focus.”

That sounds rather similar to what another Cowboys great, Michael Irvin, said last week to the Fort Worth Star-Telegram.

“This game doesn’t require skill,” said Irvin. “It requires will. If a team loses a little bit of skill but gains greater will, they can still do great things. If the Cowboys can take the disappointment of that defeat against San Francisco, beating you at home … if they can take that and internalize it in the offseason and come with less skill and more will and have a better season.”

Irvin added, “When you lack skill, you have to overcome it with will and togetherness. A man’s greatest promise comes from their greatest pain. If they felt the pain like we felt and like those fans … I want to see them jokers on the field cry like that. I want it to hurt them like that.

Related: Look Inside The Huge Dallas Mansion Emmitt Smith Is Selling For $2.2M

Like most Dallas Cowboys fans, Emmitt Smith is very frustrated.

“Flags. Penalties at wrong times to give the opposing offense the chance to keep the chains moving. Pass interference on both sides. Or jumping offsides, holding penalties, and stuff like that,” said Smith. “All those things add up and they cost you a lot. We may not look at it on the surface as it’s costing us, but deep down it halts momentum, it changes possessions, and it keeps possesions going.

“And all those things can lead to less opportunities to produce points. Or more opportunities for the opposing team to produce points. And the more you give them chances, the less chances we get. The probability of us winning has just decreased. And it’s not about talent and it’s not about effort. Because our team has given plenty of effort and they have the talent.”

With the departures of players like Amari Cooper, Randy Gregory and La’el Collins, the Cowboys may not have as much talent as they did last year, but perhaps, as Irvin put it, next season Dallas can “come with less skill and more will and have a better season.”