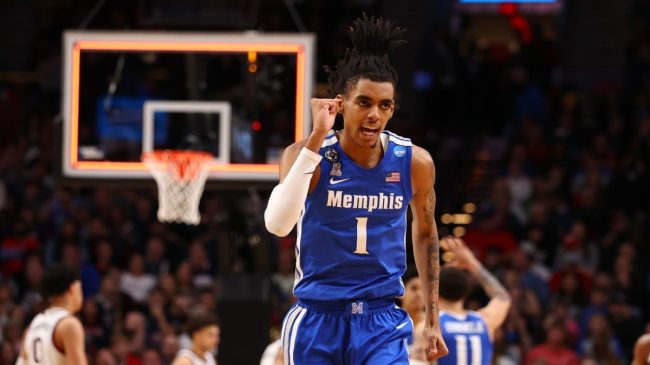 Emoni Bates once had it all.

He was the No.1-ranked high school basketball player in the country. He was on multiple magazine covers, and he was a surefire top-10 pick in the 2022 NBA Draft who 247Sports compared to Paul George.

Since then, it’s all fallen apart.

Bates’ fall began with a transfer from Lincoln High in Ypsilanti, Michigan to a pop-up prep school, Ypsi Prep. His father Elgin coached the Ypsi Prep team and directed a wild recruitment that saw Bates commit to Michigan State in June of 2020 then decommit in April of 2021. Bates then appeared to trend to the Louisville Cardinals or perhaps the NBA G League before eventually signing for Penny Hardaway and the Memphis Tigers.

He struggled mightily as a freshman with the Tigers, averaging just 9.7 points per game on 38.6% shooting. He also turned the ball over 2.3 times per game. The entire time, Bates and his father reportedly struggled to get on the same page as Hardaway.

It came as no surprise when the once-superstar entered the NCAA transfer portal in April. But what did come as a shock to basketball fans is when he committed to lowly Eastern Michigan. The Eagles went just 10-21 a year ago and finished second to last in the Mid-American Conference. But EMU is conveniently located in Ypsilanti, where Bates grew up and went to high school.

Some felt being home would be a good reset. But now it appears that may not be the case.

Pete Thamel and Myron Medcalf of ESPN reported Monday afternoon that Bates was arrested on Sunday night after officers found a firearm in the vehicle he was driving.

The report states Bates was initially pulled over for failing to stop at an intersection.

Bates was charged with both carrying a concealed weapon and “altering ID marks” on a firearm. He was arraigned Monday and his attorney, Steve Haney, asked a not guilty plea be entered on his behalf.

According to Haney, the judge agreed to a non-monetary personal recognizance bond for Bates to be immediately released from jail. Bates’ next court date is scheduled for Oct. 6.

Haney told ESPN that the arrest Sunday night came after a routine traffic stop when Bates was driving a borrowed car that had a gun in it. “Reserve judgment on this,” Haney said via a statement. “There’s way more to the story. He borrowed someone’s car, was pulled over and a gun was located in the car.”

Bates may well be found not guilty and return to the court. But the once surefire star now once again finds himself paddling upstream.