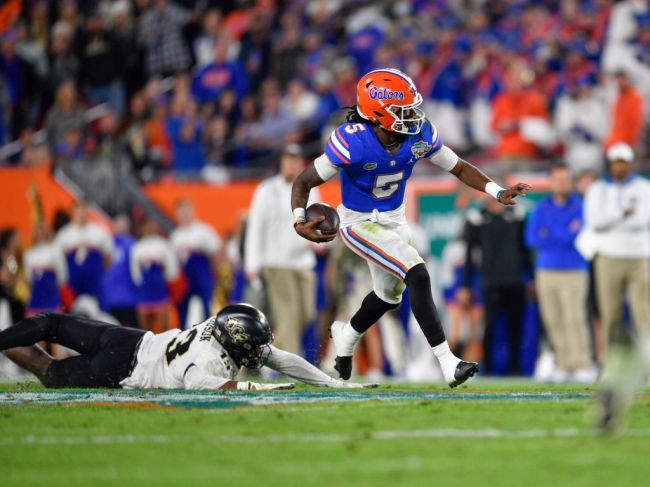 Arizona State’s football program has had a big question mark hanging over them at quarterback since Jayden Daniels surprisingly decided to enter the transfer portal. Today, they landed a quarterback that will make their situation a whole lot more clear.

JUST IN: QB Emory Jones transfers to ASU from Florida with two seasons of eligibility. He led the Gators with 759 rushing yards last season, threw for 2,734yards with 19 passing TDs and 13 INTs.

Jones has some style similarities to Jayden Daniels. https://t.co/Fl4cRb1JJh pic.twitter.com/i68GCIFlVN

It turns out that Jones had about 75 thousand good reasons to join ASU.

Jones is set to receive up to 75k in marketing opportunities in a deal with ASU’s new NIL collective, as well as the use of a vehicle from Jones Auto Centers, per source.

This is the largest NIL deal an ASU player has received.

There may be a bigger one on the near horizon… https://t.co/QcbJ2ve2ZK

Jones spent 4 years at Florida, but didn’t take over as their starting quarterback until this past season. As a redshirt junior, Jones threw for 2734 yards, 19 touchdowns, and 13 interceptions while adding 759 yards and 4 touchdowns rushing. The Gators were 6-7 with him as their starter, losing to UCF in the Gasparilla Bowl to close out the year.

Now he’ll take over as the starter for an Arizona State squad that didn’t previously have a clear-cut choice to start at QB. The team already had 5 scholarship players at the position, but none had meaningful experience at the college level.

ASU went 8-5 last season, finishing their season with a close lose to Wisconsin in the Las Vegas Bowl. The team suffered some important losses through the draft and transfer portal, but will be hoping Jones can keep them competitive in the PAC-12 South as he plays out his last 2 years of eligibility.