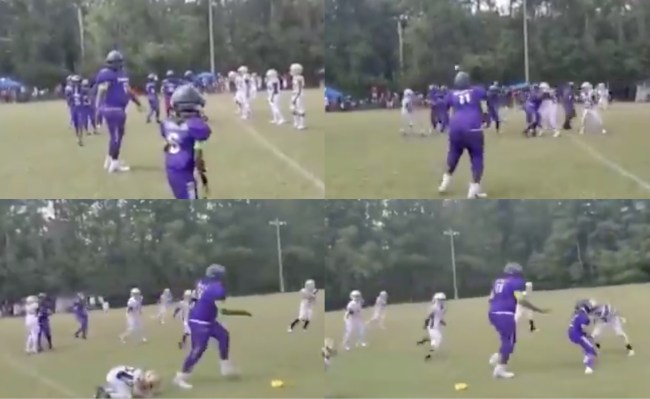 I was always told that I was a ‘late bloomer’ and kept waiting to hit my final growth spurt until I was in college and at the school’s version of the E.R. for what I found out was a broken wrist and the doctor was like ‘oh, you feel that right there? It means you’re done growing. Also, you broke your wrist.’ The first and only bone I’ve ever broken in my life and they dropped that bomb on me at the same time. SMDH.

Something tells me this 10-year-old youth football player has never been referred to as a ‘late bloomer’ and I have a hunch this kid has some growing left to do. According to social media, he’s 6’2″ and only 10-years-old.

The average height of a 10-year-old boy in the USA is 54.5 inches. That’s 4’6.5″ for anyone keeping track at home. If the Twitter detectives are right, this kid is almost two feet taller than the average height for his age. The reactions on Twitter are pretty in line with what you’d expect to see, a lot of folks calling for this kid’s birth certificate because they refuse to believe anyone that age can be this big.

Here’s the tweet that has gone viral along with the reactions and quote tweets:

10 year old me woulda still put him under. 😂 https://t.co/ol6sRjOrOJ

Every parent on the sidelines might be right about that too. The people need some proof.

Every parent on the sideline “now they know that boy aint 10” https://t.co/iENQreB28h

Nick Saban’s already got this kid’s parents on speed dial:

Alabama already on him😂 https://t.co/Q69OSnkD2A

It is hilarious that they’ve got him at Wide Receiver of all positions because he can catch pretty much any pass by towering over the opposition and nobody can stop him. It’s genius. But they should also just rotate him around to every position. Why not?

Know damn well he supposed to be playing RT https://t.co/HpyDTGmn3X

This is why the chop block was invented https://t.co/v8r5aUcIZG

The reactions to this kid getting set at the line and catching a pass aren’t too dissimilar from the reactions to this 6-year-old youth football player in Texas who went viral two weeks ago because he’s already 5’1″ tall and weighs 130-pounds at just SIX YEARS OLD. If you haven’t seen that clip yet either, check that one out.