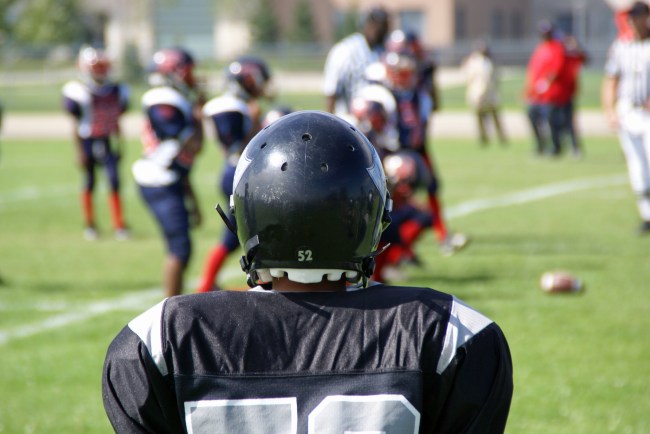 I don’t really know anything about how big most 6-year-old kids are I just know they’re small. So for the sake of this article, I Googled it and the average 6-year-old boy weighs 45.5 pounds and is coincidentally 45.5″ tall. That’s 3’9.5″ for anyone keeping track at home.

This 6-year-old (6U) football player for the Southeast Dallas Wolverines is a monster. He weighs 130-pounds and is already 5’1″ tall. That’s almost 3x the average weight of boys his age and well over a foot taller than the average.

As you can imagine, he looks like Andre the Giant on the field where he completely dominates the competition. BamaHammer describes him as a mini Derrik Henry who is simply ‘too big and too strong to be brought down’ to be taken down by the other team. Gameplay footage of this kid has gone viral on Twitter and for good reason. Check out these two clips:

Went to support my team this weekend and our 6U played this kid and he is huge!! Biggest most athletic 6 year old I have ever seen. He also played DT. He may have an offer next year!!🤣🤣🤣🤣 pic.twitter.com/bNrxJLyGcc

The general consensus from Twitter here is there’s no shot this kid is 6-years-old but Aiden Smith’s coach, Tony Davis, told TMX News he IS 6 and he’s just the biggest kid he’s ever seen.

“But just to see him have the confidence and accolades that he’s getting right now, it’s absolutely amazing,” the elder Smith told TMX News.

“This is something that he works on by himself, I just want to see that my son has the drive for the game, there’s no point in my pushing him if this is not what he wants.”

Aiden’s coach, Tony Davis, said he’s coached a lot of little boys before but that Aiden is the biggest one he’s ever worked with.

“His skills are amazing, he’s big, he’s fast,” Davis said. “…He’s super strong, when we practice and I work in with him, I have to really use my grown man strength sometimes to hold him off. He’s incredible on skills, the sky’s the limit for him in skills.” (via NYPost)

The kid is just dominant. There’s no way around this. He’s 3x the size of his competition and there’s nothing the other kids can do other than to learn some humility.

Nick Saban showing up to this kids next game: https://t.co/SlUi0pfyrC pic.twitter.com/iqciEr38dF

I can’t help but think that his teammates are in for a brutal taste of reality in the future when they move on to the next team and suddenly realize you can’t rely on one HERCULEAN teammate to win every game.