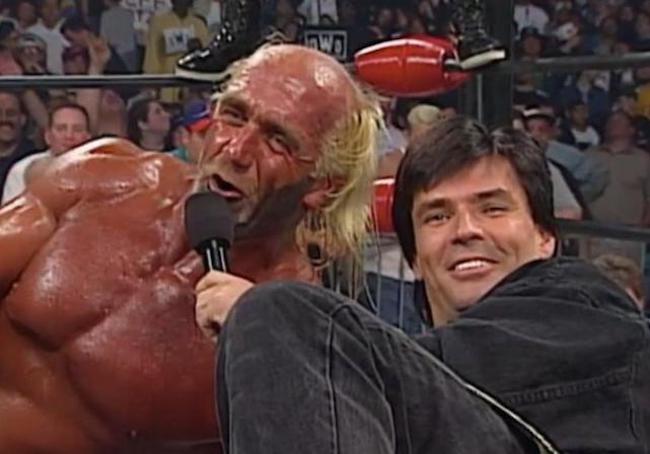 In the most recent episode of “Not About Wrestling”, guest RJ City and myself joke about the fanny pack and wonder exactly what wrestlers carried around that couldn’t be put into a backpack or duffel bag.

During the most recent episode of “83 Weeks with Eric Bischoff”, wrestling fans found out that sometimes performers were packing weapons in case shit went down behind the scenes.

Eric Bischoff and host Conrad Thompson were discussing the creative tension in WCW leading up to Road Wild 1998. The NWO had broken up into two factions – the NWO Black & White and NWO Wolfpac – and Kevin Nash was unhappy with the way the Wolfpac was being booked to lose so much.

The tension came to a head during a backstage meeting between Bischoff, Hogan, Nash, and Scott Hall, roughly an hour before a “Monday Night Nitro” broadcast.

“And I remember exactly where we were standing backstage,” recalls the former head of WCW. “It was me, Hulk, Scott, and Kevin. I’m all of 5-10, 190 pounds, and I’m surrounded by these guys. I didn’t have a lot of success as a mediator, but I did the best I could.”

In the middle of an incredibly heated moment, Bischoff looked down and spotted a knife inside Hulk Hogan’s fanny pack.

“I remember standing in the middle of it, and I look down and Hulk’s fanny pack is open. And I see a knife in there and I’m thinking ‘What the fuck.’ I’ve heard of this happening and I’ve heard these kind of stories, but nah, this can’t possibly be happening. And of all people, not Hulk.

But I think there was enough tension, anxiety, and enough threats happening that Hogan came half expecting there to be shit go down. I was saying this can’t be happening, and fortunately, it never did.

But I’ve never seen Hulk more ready to go to war as he was on that afternoon.

Thompson interrupted Bischoff during his story, “hang on, hang on, I’m really struggling with the bomb you just dropped on us here. Are you saying that Hogan didn’t just normally carry a pocket knife, that he brought one in case Nash wanted to get Detroit on him?”

“I didn’t say that,” said Bischoff. “I’m telling you exactly what I saw. I saw a Hulk Hogan that was uncharacteristically aggressive and appearing to me that he was ready to throw down in a real way. Not in a wrestling way, in a real way. I grew up in Detroit and know when it’s real and when it’s posturing. I had seen all the posturing before, but at that moment, I was standing next to a guy who was ready to go because he believed he didn’t have a choice. And when I looked down and saw him in a fanny pack with a blade in there, I thought ‘Oh fuck, this is gonna be bad.’ This can’t possibly be getting to this level.”

Bischoff continues, “Can I tell you what was going through Hulk’s mind? No. Can I tell that he never carried a knife before that night? I can’t tell you that either. Maybe a coincidence but it didn’t feel like one at the moment.”

After the admission, Bischoff and Thompson joked about the pending backlash once the story hit news websites.

“Yeah, I can’t wait until Hulk gives me a call, ‘brooothherrr’,” laughs Bischoff. “Fuck, brother, kayfabe. That doesn’t work for me, brother.”

Bischoff also joked that he was going to call Hogan after the podcast to warn him.