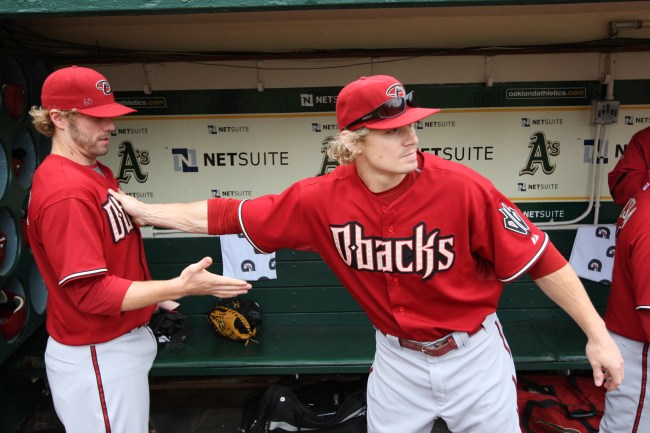 Eric Byrnes is a former Major League Baseball outfielder who played for the Athletics, Rockies, Orioles, Diamondbacks, and Mariners. He retired from professional baseball in 2010 but the 43-year-old has remained as active as ever thanks to Speed Golf.

These days, Byrnes lives in California’s picturesque Half Moon Bay where he plays fastpitch softball in between his Speed Golf rounds. If you’re not already familiar with Speed Golf then I’ll explain, it’s pretty much what it sounds like. Speed golfers try and play as many holes as possible within a specified period of time. It’s not about the score or the swing, it’s all about finishing a round in record time.

The previous 24-hour Speed Golf world record was set by Australian Ian Colston in 1971 when he completed 401 holes in 22.5 hours. Eric just beasted that record by completing an additional full round of golf.

Byrnes set the record this week by playing 420 holes from Monday to Tuesday (24 hours) at Half Moon Bay Golf Links in California and he’s now the proud owner of the Speed Golf world record.

This isn’t his first outrageous physical achievement outside of baseball, according to Golf Digest. He was the first person to complete a trans-continental triathlon where he swam 7-miles across the San Francisco Bay, biked 2,400-miles from Oakland to Chicago, and then ran 905-miles from Chicago to NYC completing an entire trek across America.

The thing about playing 400+ holes of Speed Golf in 24-hours isn’t just the wear and tear on your swing from hitting the ball, it’s everything in between. According to CBS San Francisco, this required him running over 100-miles and climbing more than 8,000-feet of elevation. It also completely nukes your ability to get out and spend 5-hours at the course on a Saturday with the boys:

“I remember him coming home once saying, ‘I just played 18 holes in 48 minutes,’” said Tarah Byrnes, Eric’s wife. “My first reaction was, ‘You can never tell me it takes five hours to play a round of golf again.’”

For this record attempt, Eric Byrnes only used an 8-iron from a ladies set of clubs to cut down on weight. He’s also not swinging the club like you or I would, according to Eric it’s a ‘polo style’ swing that’s meant to just keep the ball moving as much as possible without slowing him down.

Since retiring from baseball in 2010, Eric has lost 40-pounds as a triathlete and speed golfer so there definitely appears to be some health benefits to be gained if you’re willing to commit to a life of sprinting on the golf course while swinging the club like a complete jabroni.

Eric uploaded a few training clips to his YouTube channel a few weeks back, at least I think it’s his channel.

For more on his story and how he once shot a 103 in 18-holes in only 41-minutes, you can follow the link to read his full interview on CBS San Francisco.