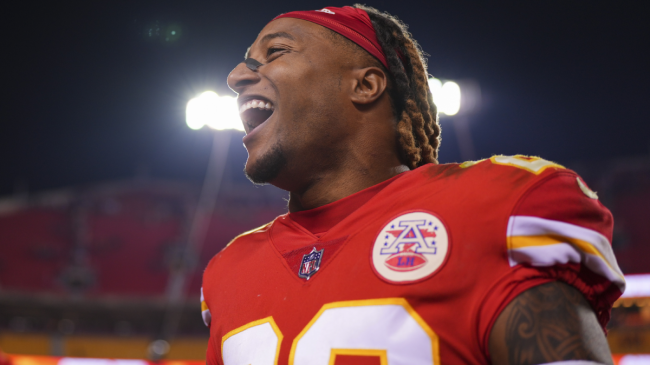 The Bengals and Chiefs met in last season’s AFC Championship Game to decide who would represent the conference in Super Bowl LVI. Cincinnati won that battle to earn a chance at a title, but ultimately came up short against the Rams.

That 2022 playoff matchup was an instant classic, with Cincy pulling out a 27-24 overtime victory. Now, we’ll see the two foes face off for the first time since that meeting.

On Sunday, the Bengals will host the Chiefs as both teams look to get back to the postseason. Kansas City currently sits atop the conference standings at 9-2 while Cincinnati is tied for the AFC North lead at 7-4. The winner will take the next step in its playoff pursuit.

If those stakes weren’t motivation enough, a couple of players on the field are putting some extra incentive on a strong showing.

Ja’Marr Chase and Justin Reid made a bet on the outcome of the Bengals-Chiefs game.

The two players, one on offense and one on defense, are looking for big performances come Sunday afternoon. Chiefs DB Justin Reid was the first to cast a stone, posting a message on social media of his intention to lock down the Bengals receivers.

He targeted tight end Hayden Hurst when asked about his plans to disrupt the Cincinnati passing attack.

“They’re gonna have [Hurst] back, he’s a very talented player. More of a finesse type of guy. Not the best blocker. I’m gonna lock him down. Straight up.”

More disrespectfully, Reid forgot Hurst’s name at the beginning of the interview, then confused him with Cincy wideout Tee Higgins.

The comments weren’t overlooked by Bengals players. Many chimed in on the video clip, including Tyler Boyd who posted the skunk emoji in his response.

Ja’Marr Chase took it to the next level, though, offering a friendly wager to the defensive back.

let’s put some money on it big time 👀

Reid played along, accepting the bet and joking about giving the Bengals receiving corps a little extra juice.

This has definitely upped the ante for Sunday’s outing, and it will give fans something to watch in the passing game. We’ll see who comes out on top in the Bengals-Chiefs battle, and whether or not they stay true to their word at the end of the day.