Eric Reid And Stephen A. Smith Get Into Heated Argument On Twitter After Colin Kaepernick Workout 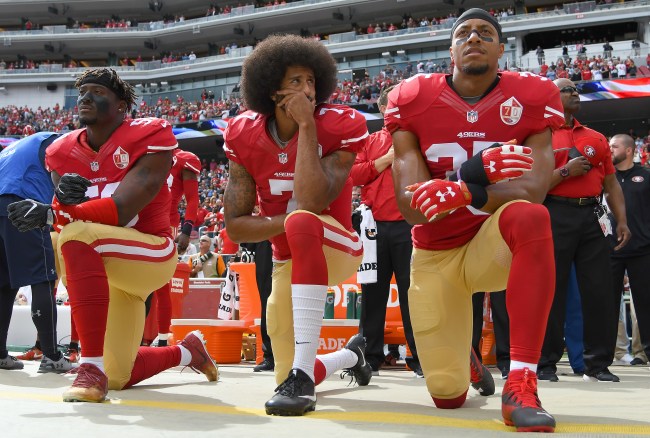 Carolina Panthers safety Eric Reid and Stephen A. Smith are going at it on Twitter.

On Saturday after Colin Kaepernick’s workout, Smith blasted Kaepernick for causing so much drama when he moved his workout outside of the Falcons’ practice facility because he wanted the media present.

He doesn't want to play. pic.twitter.com/ZuSI1IVW9r

He don’t want to play,” “He wants to be a martyr.”
“All of us believe that Colin Kaepernick would have showed us,” “I believe he would have had a job within two weeks. But he didn’t show…he wanted to show at a high school and YouTube it.

You don’t want to work. You just want to make noise.”

Reid, who is close friends with Kaepernick and participated in the workout, fired back at Smith and basically called the ESPN host a sellout.

.@stephenasmith Tap dancing for the NFL like ⬇️. Damn straight Colin wants to control the narrative! He supposed to trust the organization that blackballed him and has done absolutely nothing in good faith??? Born on Tuesday, just not last Tuesday. https://t.co/EKztmcrDbu pic.twitter.com/gz0xnDe10e

Smith saw Reid’s comment and fired back at the Panthers DB by calling him a hypocrite for calling out the NFL but still cashing their checks.

Man, please. You embarrass yourself @E_Reid35 every single time you open your mouth. You — of all people — talking of tap dancing when you’re the one collecting a check from the very institution you collect a check from. You @E_Reid35, who takes a knee — supposedlyfor brothers —

Yet attack brothers — Malcolm Jenkins, Jay-Z, ME — at every turn the second someone disagrees with you. You @E_Reid35 got the nerve to call out the @NFL when your beef was suppose to be with society in regards to police brutality and racial oppression. Where’s your plan?

Huh @E_Reid35? To call our or beat up everyone who utters a word you disagree with? All Brithers, BTW. Let me tell you something Mr. @E_Reid35: Kaepernick has been supported. We’ve all said he was done wrong. That he was blackballed. That he should be in the league. Who the hell

Hasn’t acknowledged that? But life isn’t fair. It damn sure ain’t ideal. And at some point, you’ve got the grab the opportunity. Kap’s occurred today. And what does he do: alters the process, and shows up with a T-Shirt alluding to SLAVERY @E_Reid35. For a JOB INTERVIEW! When

are you — yes, you @E_Reid35 — going to wake the hell up and realize that maybe, just maybe, the enemy at THIS POINT ain’t the NFL. It’s not Malcolm Jenkins, Jay-Z or ME. Maybe the enemy is YOU, your childish tendencies and your unwillingness to accept that you can’t run…….

Chances are…..you won’t. Because your ears are clogged and you’re too blinded by vitriol to see when a brother is showing you — y’all — love and respect @E_Reid35 by simply letting you know what will work at what won’t. But oh, I forgot: we all ain’t S&@$ in your world. So…

try 2 burry Colin. I stand 4 truth & justice above all else. You r mistaken by thinking that because u or anybody is black that you are spared from my criticism especially when you’ve been so blatantly on the NFL’s side in corrupting their own process to hinder Colin’s employment

Reid spoke to the media after the Panthers game on Sunday and once again took shots at Stephen A.

Eric Reid: SAS is tap dancing for the NFL and I have him good content. Congratulations. pic.twitter.com/2v8RWgtSls