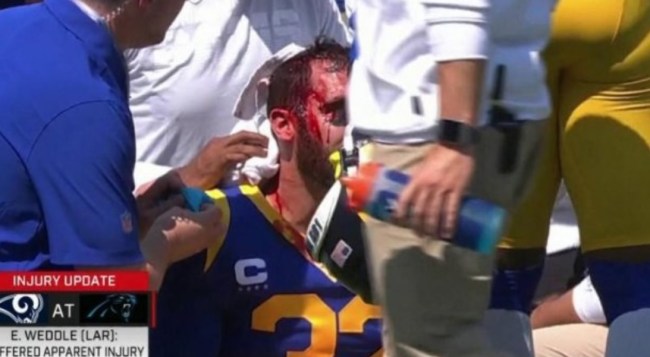 There was a scary moment in today’s Rams-Panthers game when Rams safety Eric Weddle was forced to leave the game with a bloody head injury.

In the second quarter of the game, Weddle took an inadvertent knee to the head from Panthers running back Christian McCaffrey.

Eric Weddle down injured after McCaffrey made contact with the safety's head leaping over him. pic.twitter.com/a8KU7c0jt5

Weddle immediately ran to the sideline to have his helmet removed which revealed that he was bleeding profusely from the head.

Weddle was confirmed to have a “head laceration” and was unlikely to return to the game.

Injury update: Eric Weddle is doubtful to return with a head laceration.