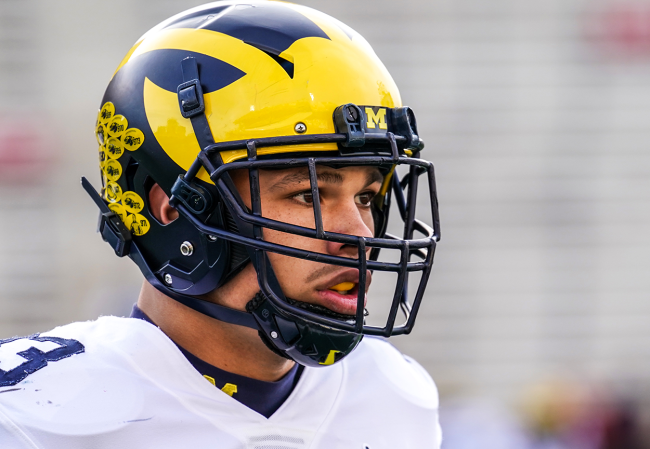 University of Michigan tight end Erick All Jr. is set to play a crucial role in the Wolverines offense this fall. As a junior in 2021, the 6-foot-4, 245-pound former four-star recruit caught 38 passes for 437 yards and two touchdowns.

Those numbers are expected to increase this year, and he will have someone new in the stands watching his senior season.

Erick All is expecting his first child later this summer.

As a senior leader on the team, All was one of Michigan’s representatives at Big Ten Media Days on Tuesday. He spoke to the media about last year’s win over Ohio State and said that he knew it was going to go down that way.

In addition, All is from Ohio and never received an offer. But that’s okay, he says, because he never really liked the Buckeyes to begin with.

Michigan tight end Erick All said he wasn’t surprised by the way the Wolverines beat Ohio State last season because of what he saw on film.

An Ohio native, All was recruited some by Ohio State but was not offered by OSU and said he “never really liked Ohio State anyway.” pic.twitter.com/Uh9P9oV6kd

Both teams, no matter of their records, enter into The Big House or The Horseshoe with a chip on their shoulder and some hate in their heart. For All, he has the little bit of extra motivation after his in-state school chose not to offer him.

Last year’s win also just so happens to line up perfectly with an important date in All’s life and it is rather funny when you think about it. During his time with the media on Tuesday, All revealed that his baby boy is to be named Houston and that he is due on August 27th.

#Michigan TE Erick All’s first born is expected Aug. 27. Baby will be born in Dearborn. Michigan has transportation set up for him if it happens while he’s at practice, team event, etc.

It’s a boy, and they’re naming him Houston. pic.twitter.com/iZvM06IsE3

If you go back nine months from August 27th (because that’s how long a pregnancy lasts), the calendar lands on November 27, 2021. That just so happens to be the day that Michigan beat Ohio State for the first time in their last eight meetings.