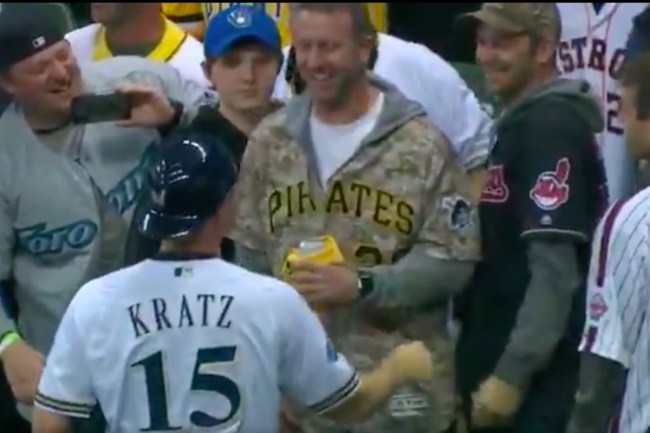 Last night’s Game 6 of the NLCS between the Milwaukee Brewers and Los Angeles Dodgers was pretty sick. Not only was Miller Park jam-packed and full of energy, but, with the Brewers winning 7-2, it gave baseball fans a chance to say the two best words in sports, “Game 7,” which is going on tonight back in Milwaukee.

And, given his team’s success in October, one of the players getting a ton of attention during these MLB Playoffs is Brewers catcher Erik Kratz. The 38-year-old has sort of charmed his way into the national spotlight, with an awesome story of the journeyman sticking with a team that’s just one game away from reaching the World Series. It kind of helps that he’s got a sense of humor and is genuinely enjoying this wild ride, with stories about him taking a flop to win a bet years ago resurfacing to make people like the guy even more.

Well, another cool story with Erik Kratz happened last night before and after Game 6, when the catcher was surprised by his college buddies, which led to a pretty awesome scene in the ballpark last night.

Erik Kratz's college buddies surprised him at the game tonight 💙💛

Want to know what’s even cooler about Kratz’s good buddies showing up to surprise him? How about the fact that they called up the ballplayer’s wife and literally raided his closet to each wear one of his game used jerseys to Game 6 of the NLCS.

Milwaukee Brewers catcher Erik Kratz has played for 7 major league clubs. A dozen of his college friends called his wife and raided his closet. Each wore one of his game used jerseys and surprised him after Game 6 of the NLCS. pic.twitter.com/tlrb3Lu7hN

What an amazing tribute to a guy who’s paid his dues to get where he is 🙌 pic.twitter.com/4ljJitJBYD

Kratz, who, as mentioned, has been a journeyman catcher throughout his career, has suited up for seven MLB teams in nine seasons. Hell, according to Baseball Reference, since August 31, 2017, Erik Kratz has gone from the Indians to the Yankees, back to the Yankees as a free agent, to being traded by New York to these Brewers. Talk about some serious moving costs, huh?

It’s stories like this one that makes sports awesome. It’s also a reminder why, when you surround yourself with good bros, it’s dope to share in big-time moments together. Wonder what might be in store for this crew should Kratz’s Brew Crew reach (or win) the World Series?