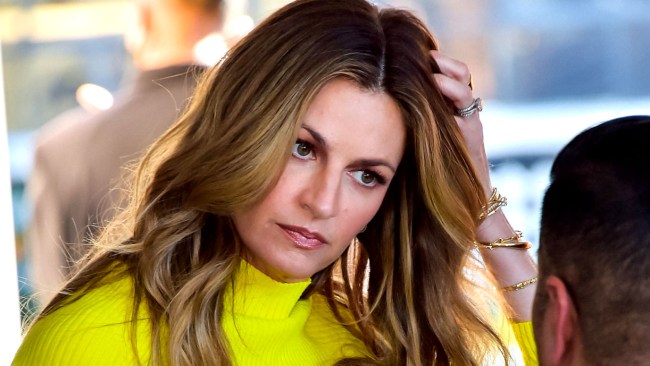 Fox NFL sideline reporter Erin Andrews spends a lot of time in cars and on planes as part of her job.

She has often spoken about how horrible traveling can be, especially with her Calm Down podcast co-host Charissa Thompson.

This week, she shared another harrowing tale of travel and this time it could have ended with her being seriously hurt or even killed.

First, as she was on her way to Minneapolis for the Week 1 tilt between the Vikings and Packers, the charger in her car-service vehicle didn’t work and the door wouldn’t close properly.

Then, later as she was on a conference call with Fox broadcasters Kevin Burkhardt and Greg Olsen along with some players on the Packers, including Aaron Rodgers, she noticed something else very disturbing.

“I’m typing, headphones are working, we’re good. I hear snoring. I know it’s not Greg Olsen, Kevin Burkhardt or Aaron Rodgers snoring. It’s my driver who fell asleep at the wheel. On a highway from Chicago!” Andrews shouted.

“Timeout. What do you mean he fell asleep at the wheel?” Thompson jumped in.

“And the car is moving? We’re not parked?” Thompson then asked incredulously.

Mind you, this all occurred at 2 p.m. local time.

After the driver wakes up and she gets off the call with Aaron Rodgers she says, “I go ‘pull over at a Starbucks.’ I make him pull over at a McDonald’s. I go in, I get him a coffee. He doesn’t drink it. The entire car ride I am like ‘ahem ahem ahem’ monitoring if he’s sleeping at the wheel.”

“It’s my driver who fell asleep at the wheel”
A story so wild you have to hear it to believe it@ErinAndrews @CharissaT @calmdownpodcast pic.twitter.com/yw9jLdC69Q

— Calm Down with Erin and Charissa (@calmdownpodcast) September 16, 2022

Fans of Andrews, much like Charissa Thompson (who recently made the mistake of cutting her own hair), couldn’t believe her story.

This is nuts.. Not sure I am just pulling over & getting this driver a coffee. I am pulling over and driving the car myself or getting another car. https://t.co/0gknR9Kow8

She did have a lot of faith that the driver wasn’t going to go back to sleep, didn’t she?

That could have turned out a whole lot worse 😳

At least she got a good story out of it!

Is it just me or is Erin Andrews constantly getting into shit? Like girl, someone smited you. https://t.co/Mk36QCYeq7

Listen to the full episode below…