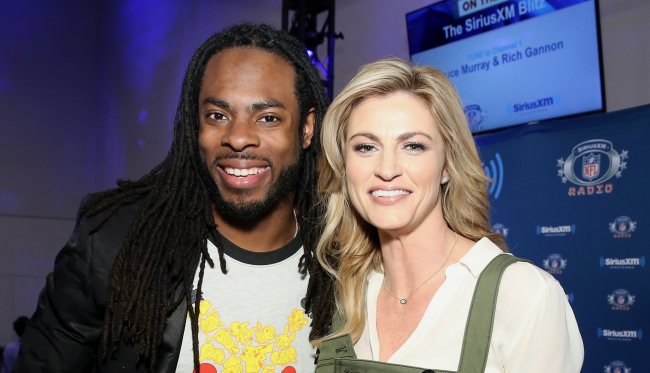 Way back on January 19, 2014, following the Seattle Seahawks big win over the San Francisco 49ers in the NFC Championship Game, Richard Sherman was corralled by Erin Andrews for a post-game interview.

He then proceeded to lose his mind, calling out Niners wide receiver Michael Crabtree in a rant for the ages.

“I’m the best corner in the game!” Sherman said. “When you try me with a sorry receiver like Crabtree that’s the result you’re going to get! Don’t you ever talk about me!”

“Who was talking about you?” Andrews asked stoically.

“Crabtree!” Sherman replied. “Don’t you talk about the best, or I’m going to shut it for you real quick!”

Hard to believe it has been eight years since that iconic moment.

Also hard to believe was the reaction it garnered and the negativity that was shown towards Andrews.

“If Michelle Tafoya or someone like that were interviewing, I can’t help believe that she wouldn’t have asked the appropriate followup and been a little bit more composed,” he added. “Whereas the gal that was asking the questions was almost like she was on a stage. It wasn’t about her, it’s all about him, and the more I think about it, the more irritated I get.”

Amazing, right? Well, it turns out that Erin Andrews herself would even have done things a little differently if she could go back in time.

During an appearance on 10 Questions With Kyle Brandt this week, she talked about it.

“I was so mad at myself,” she admitted. “There were so many different things I could’ve gone, and yeah, I knew that it was gonna end up that way that I was just so pissed. I love Richard, I loved him before that happened. I was just so mad because I was like, ‘This is the coolest moment.’ As I said, we were in a meeting with him the day before. he told us how much he did not like Crabtree. So I knew he was talking about him but I knew America didn’t know. And I actually thought, ‘People are going to think he’s freaking yelling at me.’ And he’s not, he’s the man.”

Andrews added, “I’m so bummed because I wanted to get a third question, he walked away. I think Fox panicked a little bit because they thought he cussed, he didn’t. I wish we could do it over, but we can’t.”

Actually, we can, because Brandt literally had her redo the entire interview with him standing in for Richard Sherman.

Here, we did a redo. @RSherman_25 @ErinAndrews pic.twitter.com/w5Dwz4lEQw

Pretty good, right? Even I was fired up watching that.

Still not as good as this though.