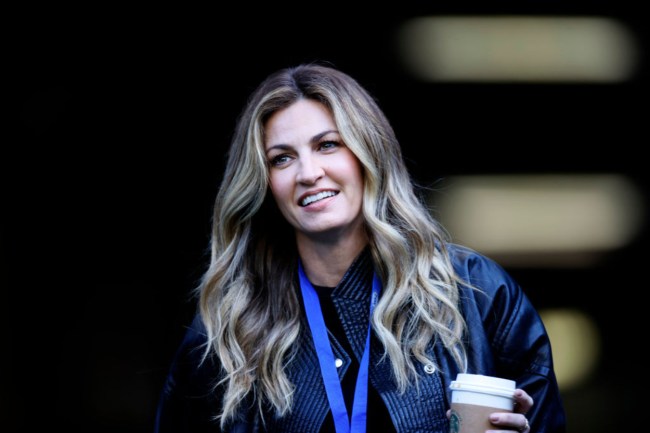 Erin Andrews has been a first-hand witness to Tom Brady’s greatness on the football field for years, but her favorite encounter with TB12 actually came away from the field. It did, of course, involve footballs, however.

On her most recent episode of her ‘Calm Down‘ podcast with Charissa Thompson, the two got to reminiscing about Brady as he recently announced his retirement from the NFL. This led Andrews to share a story about her favorite Brady-involved memory.

“This past summer, we’re in Montana,” Andrews began. “My dad came to visit, and it was the final day Tom was throwing before he had to leave, and I said, ‘Dad, do you want to go watch Tom throw? Do you want to go meet him?’ And he said, ‘Let’s go do it.’”

Andrews’ dad got to meet Brady and the two chatted for 15 minutes or so before the seven-time Super Bowl winner shouted over at her.

Erin Andrews Got To Shag Footballs For Tom Brady

Andrews, who said she was “severely hungover” at the time, jumped up and started shagging footballs as Brady threw passes to Erin’s husband, former NHL player Jarret Stoll. She went on to say that this was the best day of her life.

“I just thought to myself, ‘I know how competitive he is. If I don’t line these footballs up correctly, if I don’t bring them back at the right time,’” Andrews said. “

My husband would catch the ball, he would throw it to me, I would put it in the bag. So this happened like eight times, and then once the duffle bag was full, I said, ‘What do I do? What do I do?’ Jarret’s like, ‘Go run it to him.’”

“I did this probably like ten times and each time I’d run the bag back he’s getting worked on by Alex, he’s like, ‘Thanks, thanks EA.’ And I was like, ‘Best day of my life,’” she said.

Shagging footballs for anyone, even if that someone is Tom Brady, doesn’t sound like a ‘best day of my life’ situation, but Andrews was clearly getting across the point that that’s a moment she’ll never forget.