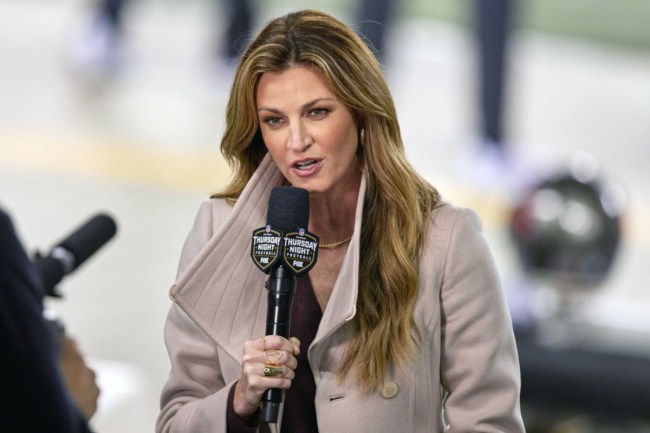 Erin Andrews made headlines on Christmas for hugging Aaron Rodgers following her postgame interview and recently confirmed she saw all the uproar about it.

Andrews, like most reporters in today’s world, conducted her postgame interview socially distanced. After the interview wrapped up, cameras caught her walk over to Rodgers and give him a hug.

People seemed to have three reactions to Andrews giving the QB a hug.

One group of people seemed to think Andrews was completely in the wrong to go over and hug an unvaccinated, controversial Rodgers. Another group of people was quick to conclude the fact that her doing the interview socially distanced was nothing but theatre. You also had a large number of folks not see the big deal in it at all and simply react to other people’s reactions.

It’s worth noting the NFL and Fox are the ones telling Andrews to conduct these interviews six-feet apart, which she confirmed she’s happy to comply with.

Andrews certainly heard and saw the reactions all over social media and she didn’t see the big deal in hugging Rodgers, a friend of hers for 15 years, whatsoever.

“I pretty much have hugged Rodgers since I started covering the NFL. He’s been a good friend of mine for the last 15 years,” Andrews said on her podcast ‘Calm Down.’ “It was so funny because the people close to me in my life like my family or other quarterbacks I know or other players are like ‘Why is this a big deal?’

Andrews thought people were reacting so wildly to the hug for two reasons: because Rodgers is such a polarizing figure and because she is a woman.

Both of those things are valid. Rodgers is the most talked about player in the NFL by miles and is hated by many. As far as Andrews being picked on because she’s a woman, we see male reporters shake hands with and hug professional athletes every day and don’t hear a word about it.

Rodgers Isn’t The Only Player Andrews Has Hugged This Season

Andrews went on to explain that she’s around these players for 18 weeks each year and she’s made friendships with a lot of players. She confirmed she went over and gave Odell Beckham Jr. a hug at a recent game as well as Matthew Stafford.

“I gave [Matt] Stafford a hug and I’m friends with him and his wife and no one said anything. Maybe because Aaron is a lightning rod. So stupid. Slow news day,” Andrews said.

Andrews is going to keep hugging her friends, as she should.