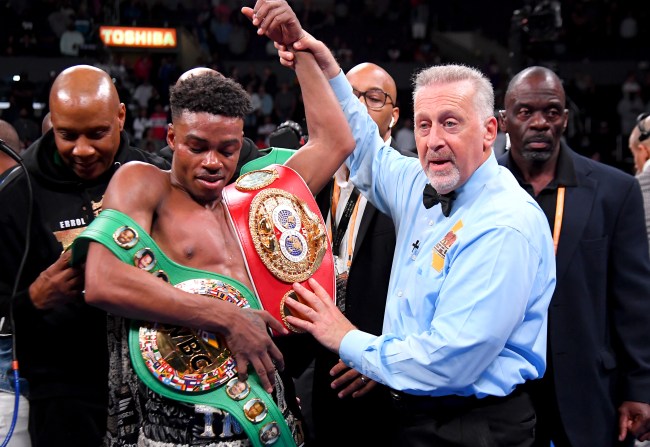 Can you do me a quick favor, internet stranger? Remind me to pray to the God Errol Spence Jr. prays to because that’s the God that will allow a man to escape a sure death. K thanks!

The IBF and WBC welterweight boxing champion is reportedly in the intensive care unit and in ‘serious condition‘ at Methodist Dallas Medical Center after being involved in a scary one-car accident in Dallas at 3 am this morning.

The 29-year-old, who is 26-0 in his professional career, was not wearing a seatbelt his white Ferrari veered over the center median and flipped multiple times while going at high speeds.

#Breaking More exclusive security camera video showing the crash that injured Championship Boxer Errol Spence Jr when he lost control of his Ferrari and it rolled over multiple times on a Dallas street. He was ejected from the vehicle and injured but expected to recover pic.twitter.com/0LXpel7qNN

A slowed down version of the crash:

Here is a slowed down video of the Errol Spence Jr crash that shows his Ferrari flipping multiple times. Amazing to hear he survived with broken teeth and injuries he is expected to recover from pic.twitter.com/y7dKo40N9u

Here is a depressing video of two drivers slowly driving through the wreckage while Spence lay on the ground after being ejected from the car.

#Breaking video moments after Errol Spence Jr flipped his Ferrari on a Dallas street 2 vehicles drive through the wreckage without stooping. The boxer had been ejected from the car and was lying on the street injured at the time. pic.twitter.com/eo6E4FXDXx

The car was damn vertical at one point:

Friends of Errol Spence Jr say it’s a miracle the boxer survived after his white Ferrari went airborne and rolled multiple times after he lost control and crashed near Downtown Dallas. Spence is at a hospital but expected to recover. pic.twitter.com/xSJvYGOS0W

Spence is said to have suffered serious, but non life-threatening injuries, which is about as ideal as you could hope for in this situation.

Premier Boxing Champions spokesman Tim Smith told ESPN: “The doctors are monitoring his condition, but his injuries are not life-threatening. We will have further updates as the doctors update his condition. We’re all wishing the best for Errol.”

#Breaking Encouraging news about Welterweight Champion Boxer Errol Spence Jr. Sources say he suffered broken teeth but is expected to recover after rolling his Ferrari early this morning near Downtown Dallas. Sources say he could face a DWI charge based on the investigation pic.twitter.com/4IPhIcO0ya

The boxer’s last fight was a September 28th split decision victory over Shawn Porter, who took to Twitter to wish his opponent well.