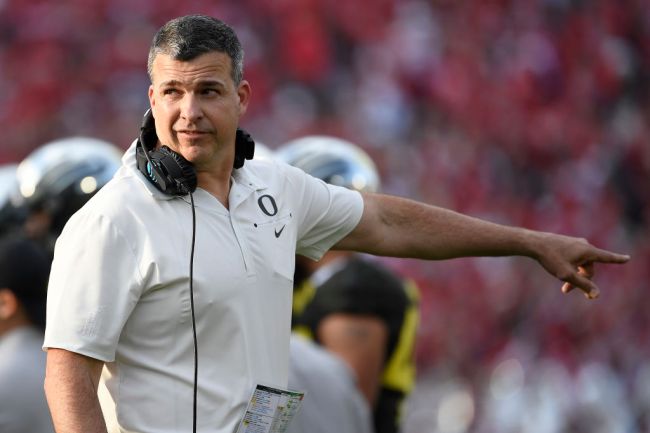 To set the scene here, Oregon wide receiver Kris Hutson caught a pass just before halftime during the Ducks’ win over Arizona on Saturday. After making the grab, he stood up, flexed, and spun the ball which resulted in an unsportsmanlike conduct penalty.

Gilmore was on the call for ESPN, and when Cristobal started screaming at Hutson for his bonehead play, Gilmore reacted by calling it “too much.” Fox Sports’ Doug Gottlieb then tweeted a clip of the play and Gilmore’s commentary and called the broadcaster out for what he thought was “insane commentary.”

This is when Gilmore brought race into the conversation saying Cristobal, a second-generation Cuban American, screaming at Hutson rubs a lot of people the wrong way and that it was bad optics.

As you’ll notice in the clip, Gilmore himself says “this is not high school” in reaction to Cristobal’s screaming before saying it was a little too much. It was only when Gottlieb tweeted the clip that Gilmore inserted racism into the situation.

Also, Hutson stood firm while being yelled at by his head coach and even looked Cristobal in the eyes and says “yes sir.”

Moreover, the image of a 51 year old White man berating a young Black man so publicly rubs a lot of us the wrong way. Especially w/all the racial injustice. Bad optics. U can deliver the lesson w/o flexing your power & control. It did not make Black parents I know happy.

Gilmore was quick to point out that Cristobal is Cuban after calling him out for yelling at his player.

Gottlieb fired back at Gilmore on Twitter after his reply as well explaining that Gilmore was the one making the entire thing racial, which is 100% accurate.

No Rod, it rubs you the wrong way. You are making it racial – (MC is Cuban BTW)- most parents want discipline for their son. You think yelling at a kid for some bullshit is too hard? Cmon man. https://t.co/1d90COjnHP

At the end of the day, both of these things can be true: Cristobal may have gone a bit overboard by screaming at his player in the manner that he did, but to call him a racist because the player he yelled at happened to be black is ridiculous.