ESPN Is Reportedly Refusing To Pay NFL $3.8 Billion/Year The League Is Demanding During TV Rights Negotiations 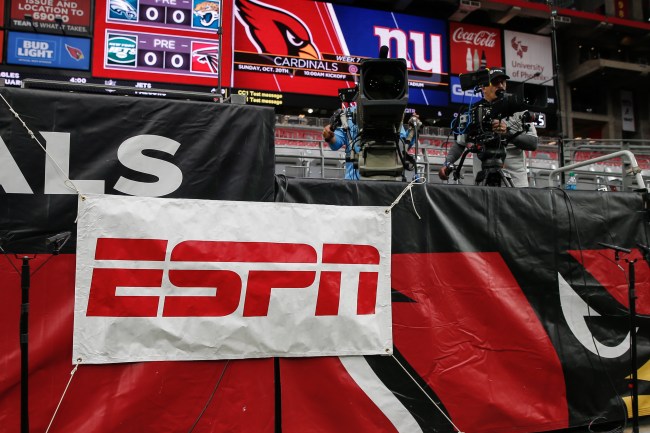 ESPN/Disney is apparently ready to play hardball with the NFL.

According to a report from Alex Sherman of CNBC, the league is looking for its broadcast partners to pay double what they paid in their last TV rights deal to broadcast games during negotiations.

Scoop: NFL asking for 100% increase on TV rights from all of its network partners; Disney is saying no way. https://t.co/UN7x7oR21G

NBC, CBS and Fox are likely to accept increases closer to 100% than Disney, which is currently paying much more than the three broadcast networks for its Monday Night Football package, said the people, who asked not to be named because the negotiations are private.

Despite the fact that the NFL wants its rights renewals completed by March 17, Disney is currently refusing to pay $3.8 billion per year the league is asking for which will include TV rights for Monday Night Football, highlights, and streaming rights.

Disney has already rejected paying anywhere close to $3.8 billion per year for its new deal, said two of the people. Disney CEO Bob Chapek alluded to pushing back on the NFL’s asking price during his company’s earnings conference call last week.

The league has asked Disney to pay the same type of increase as its other partners because Disney is asking for more from the NFL this time around — including double-header Monday Night games, where one game airs on ABC, the Disney-owned broadcast network, the people said. Disney also wants ABC to become part of the Super Bowl rotation with NBC, CBS and Fox. ABC was the home of Monday Night Football until 2005.

Sports business journalist Andrew Marchand believes that Disney will eventually be able to negotiate a lower price from the NFL.

ESPN already pays more than other networks for less.

The NFL is king, but It may not have full leverage here because what is alternative to Disney money.

If Amazon does take Thursdays and other networks stick (CBS, Fox on Thursday & NBC, Sunday), where can NFL take Mondays.

So it probably works out, but you can see where Disney may be able to negotiate a little.