Here’s How Many Twitter Followers ESPN Lost Due To Today’s Layoffs (Hint: It’s A LOT) 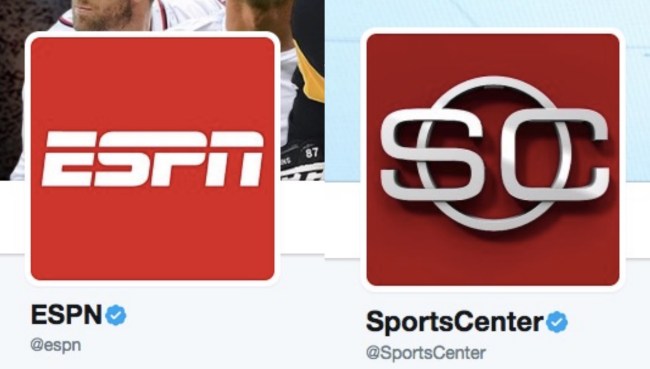 All day long we’ve seen the biggest names at ESPN announce that they’ve been laid off. Both on-air talent and lifelong journalists, they’ve been cut as part of ESPN’s move to lay off 100 staff members. I wrote earlier about how Twitter simply cannot come to grips with why ESPN has chosen to lay off Ed Werder but not Jemele Hill. People have also speculated at the future of ESPN being 8 continuous hours of Stephen A. Smith yelling at the screen.

In the midst of thinking about all of these firings, I began to consider the idea of this incredible pool of talented sports journalists banding together to start their own website/podcast/YouTube channel. It’s 2017, all you need in order to start a successful website is traffic. First, I began thinking about how many millions of Facebook fans ESPN might have lost today by firing people like Trent Dilfer, Ed Werder, Jim Bowden, Danny Kanell, and Pierre Lebrun. I was shocked to discover that none of these people have large Facebook followings. I’m guessing ESPN has an internal policy against self-promotion on Facebook in favor of promoting all of their massive pages (Sportscenter, etc).

After that, I turned to Twitter to see what the cumulative number of followers is of all the former ESPN employees who were laid off today, and holy crap. ESPN might’ve taken a lot of $$$$ off the books today and restructured their organization, but they just lost millions of Twitter followers.

Here’s what the list looks like, in descending order of ‘# of Twitter followers’, for the staffers that we know have been laid off so far. In some cases these have been rounded down, so the numbers could be several thousand higher:

What’s that come out to? Give or take a few thousand, today ESPN lost 3,244,897 Twitter followers based on the follower counts of the people they fired. That is a literal shit ton of Twitter followers out there waiting to be scooped up by media organizations….Or these talented journalists can band together and start something new. At this point, I think we can safely call today ESPN’s version of the ‘Red Wedding’.

For the list of ESPN personalities who have been fired today I used this article from Awful Announcing. It’s quite possible I left out some huge names and the number is even higher.