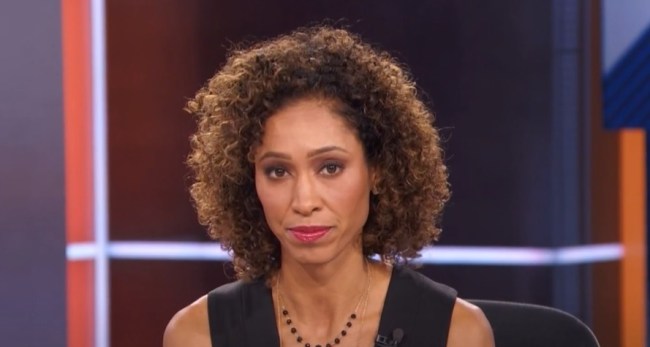 ESPN’s Sage Steele is making some serious allegations against two of her colleagues at the network.

According to Steele, both Elle Duncan and Michael Cleaves went behind her back to exclude her from being featured on an on-air special about race because they complained she wasn’t ‘an authentic voice for the black community’ due to her past criticisms of Colin Kaepernick and anthem protests.

“ESPN an­chor Sage Steele has told man­age­ment she be­lieves she was ex­cluded from a spe­cial the net­work aired on race last month be­cause she wasn’t con­sid­ered by cer­tain Black col­leagues to be an au­then­tic voice for the Black com­mu­nity” https://t.co/zwKiB5yECR

Ms. Steele said colleagues told her she was considered for the special by the executive in charge, Michael Fountain, until two of the other on-air personalities involved, Elle Duncan and Michael Eaves, complained, saying Ms. Steele wouldn’t be accepted by what they considered the Black community, according to the person familiar with her account to management.

Ms. Steele, one of the network’s most prominent on-air personalities, voiced her concerns to ESPN President Jimmy Pitaro in early June, saying the incident showed the network has a divisive work environment, the person said.

Steele went on the record with the Wall Street Journal to talk about the incident.

I found it sad for all of us that any human being should be allowed to define someone’s ‘Blackness.’ Growing up biracial in America with a Black father and a white mother, I have felt the inequities that many, if not all Black and biracial people have felt—being called a monkey, the ‘n’ word, having ape sounds made as I walked by—words and actions that all of us know sting forever. Most importantly, trying to define who is and isn’t Black enough goes against everything we are fighting for in this country, and only creates more of a divide.”

An ESPN spokesperson denied that Steele wasn’t included in the special due to complaints from Eaves and Duncan and Undefeated editor-in-chief Kevin Merida said that the platform does not have a “litmus test for Blackness.”