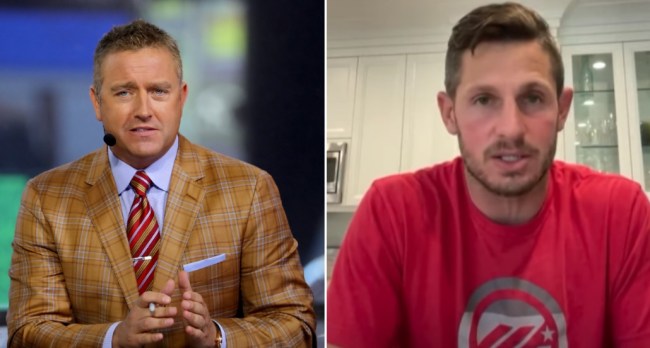 On Wednesday, Orlovsky was heavily criticized for reporting that some teams had issues with Fields’ “work ethic” during an appearance on ‘The Pat McAfee Show.’

Orlovsky was immediately called out for pushing a racially biased media narrative by regurgitating what some anonymous team execs had told him about Fields.

It always appears that certain QBs are labeled as lazy or lacking a great work ethic while others are lauded for their IQ & mental capacities. It would be nice if we wouldn’t routinely affix stereotypes to ONLY Black QBs. Non-Black QBs NEVER get these labels on TV. Weird, right? https://t.co/CZ7exbvjAc

On Thursday, Orlovsky took to Twitter to apologize for his reporting on the McAfee’s show and clarified that Ohio State coaches think Fields’ work ethic is great.

In regards to Fields….👇🏼 pic.twitter.com/9VgIRyShrB

Herbstreit, who is the top college football analyst at ESPN, blasted his colleague and called him “reckless” for resharing the Fields information.

😂😂😂
Absolutely RIDICULOUS.
Even if YOU aren’t saying it…
to pass that along from “people in the know” is reckless and absurd!! Embarrassing!! https://t.co/r0RFSr1B6y