ESPN’s Malika Andrews Fights Back Tears While Talking About Breonna Taylor ‘She Was 26, I’m 25 And That Could Have Been Me’ 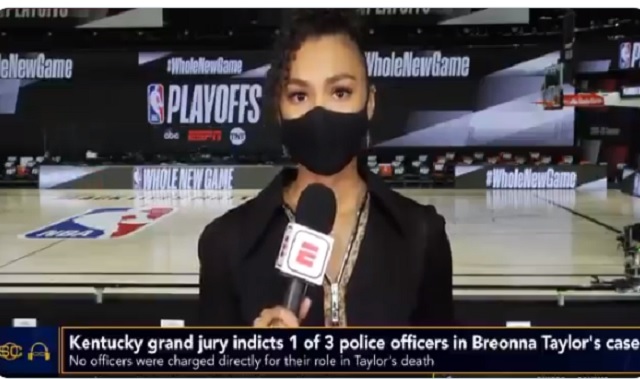 On Wednesday afternoon Kentucky attorney general Daniel Cameron announced that officer, Sgt. Brett Hankison, would be charged with “wanton endangerment,” following the shooting of Breonna Taylor which prompted outrage from those in the NBA community.

After Game 4 of the Celtics-Heat series, ESPN’s Malika Andrews got extremely emotional and had to fight back tears while talking about the emotions inside the NBA bubble following the DA’s decision to not charge the officers with a crime in the shooting of Breonna Taylor.

ESPN's @malika_andrews gets choked up while talking about Breonna Taylor "She was 26 and I'm 25, it could have been me" pic.twitter.com/UunJwuekgx

I have prided myself in being able to be objective and cover these sorts of issues but when it is so clear that the system of objectivity in journalism is so whitewashed and doesn’t account for the fact that while I’m walking up the hill my wonderful producer Melinda reminds me that Breonna Taylor was 26 and I am 25, and that could’ve been me, it is very hard to continue to go to work and that’s what the players are feeling.

Andrews wasn’t the only person to speak out over the Taylor decision at ESPN. Earlier in the day both Stephen A. Smith and Michael Wilbon condemned Kentucky attorney general Cameron for not charging the officers in Breonna Taylor’s case.

“I’ve got several reactions … The first one is — I’m not surprised. Part of our outrage about this is, this isn’t the first time.”@RealMikeWilbon and @stephenasmith discuss the grand jury's decision made in Breonna Taylor’s case: pic.twitter.com/RYnhyb7Wl7