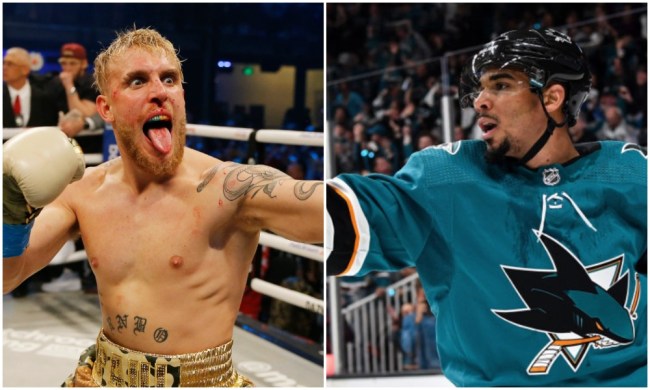 Jake Paul and Nate Robinson squared off in the ring as part of the undercard of the Mike Tyson – Roy Jones Jr. fight this past weekend. The match marked Robinson’s debut in the ring and it’s safe to say his first match will be his last as Paul knocked him out cold in the second round. Robinson is now ‘the guy that got knocked out by Jake Paul’ and no longer ‘the undersized, three-time NBA Dunk Contest champion’.

Following the fight, Paul not only moronically called out Conor McGregor for a fight, but plenty of current and former professional athletes said they now want a piece of Paul in the ring as well. San Jose Sharks winger Evander Kane jumped on Twitter saying he’d wreck Paul in the ring and it honestly may be an intriguing matchup if the two did square off.

yo @jakepaul I’d wreck ya. Easy to beat up guys with no experience and much smaller. August 31st 2021 Vegas we can see if you really about that action. #YOURMOVE

For the Robinson – Paul fight, plenty of people thought that Robinson, being a former professional athlete and all, would knock off Paul despite the dramatic size difference. Robinson is 5-foot-9 while Paul is 6-foot-1 and 13 years younger.

Kane would be a much better matchup from a size and age perspective being 29-years-old and standing at 6-foot-2. While Kane is a speedy playmaker on the ice, he’s also never been one to shy away from a good bout. He’s wracked up over 100 penalty minutes in three of his 12 seasons in the NHL for a total of 946 penalty minutes.

Whether Kane’s tweet about wanting to fight Paul is legit or it was just him reacting to Robinson getting knocked out in the ring then torched online, only time will tell.

Are there more high-profile people out there that Paul could fight next? Absolutely, but a young-ish professional hockey player around the same size as him would be intriguing, to say the least.