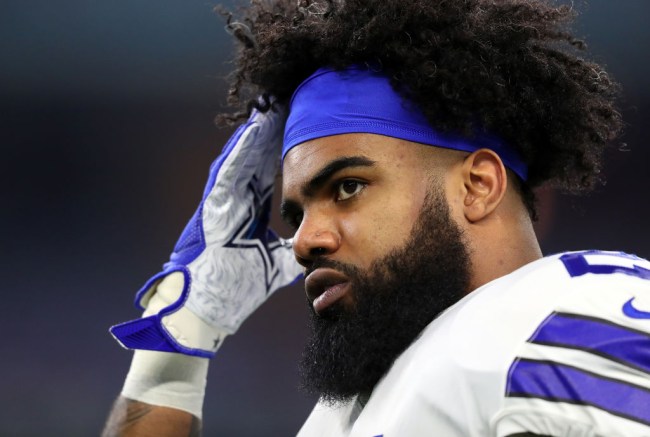 Ten days ago it was revealed that Cowboys running back Ezekiel Elliott had tested positive for the coronavirus. Elliott was not happy about the fact that the news leaked and voiced his frustration about the matter on social media. The good news of the situation, however, is that on Wednesday he said he’s back to feeling ‘normal.’

Elliott gave a health update during a Twitch stream explaining that he did have a shortness of breath and a cough for a couple of days and while he’s back to feeling better he hasn’t been cleared by doctors to work out yet.

The 24-year-old made it a point to express his concern for the safety of other players, particularly their families, as the NFL is preparing to return to training camps in July as positive test numbers have started to increase in certain areas of the country.

“I just don’t know how they can keep the players [healthy],” Elliott said per ESPN. “You gotta put the health of the players first.”

“And it’s not even so much, I would say, the players’ health — because I got corona, and it really didn’t affect me much. But a lot of people have kids — they may have kids with asthma; they may have newborn babies; their parents or grandparents may live with them. … We have to find ways to make sure that players and their families — and the coaches also and their families — aren’t put at risk.”

While he voiced these concerns, he made it clear that he hopes the NFL season happens, but it “has to be right.”