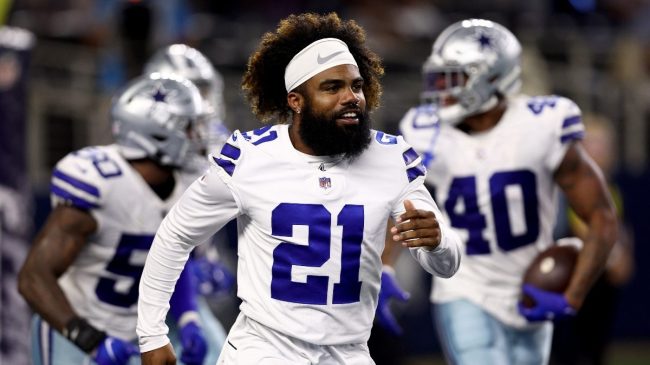 After a roller coaster of an offseason, the Dallas Cowboys aim to remain atop of the NFC East this season. It’ll be interesting to see how they do, as the Philadelphia Eagles have become the favorite in the division. Regardless, Ezekiel Elliott reveals his hopes for his team, as the star running back has big aspirations for the Cowboys.

According to Todd Archer, Elliott reveals that his personal motivation is to make a deep run in the playoffs. Additionally, he mentions how he wants to “get a shot at that Super Bowl.” That’s the dream of every NFL player and fan. However, the Cowboys have a long way to go before having those discussions.

Ezekiel Elliott’s personal motivation this year: “I’m ready to make a run in the playoffs, I’m ready to go deep and get a shot at that Super Bowl. Focus on getting better every week, taking the right steps to get to that point, I think everything else will take care of itself.”

Was it a different mindset in previous years?!

How about making the playoffs first.

So, hopefully Elliott maintains this motivation. It’ll be a difficult road for the Cowboys this season, as there are plenty of Super Bowl contenders in the league. Keep an eye on this franchise though, as they do have a solid enough roster to make some noise in the NFC East.